As a fighter, you are always looking to showcase a wide range of skills. In today’s episod 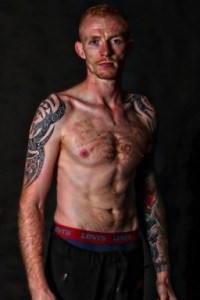 e of Across The Pond, you will meet a unique Lightweight with show stopping moves such as spinning backfists. A professional since March 2013 and representing UTC Cannock, 28 year old Tim Wilde owns a 7-1 record in 8 career bouts consisting of three knockouts, three decisions and one submission. Wilde has fought for various promotions in Europe including BAMMA and Cage Warriors.

In his MMA debut, Wilde submitted Dean Williams in the second round. Then, he won back to back fights in BAMMA, defeating Stephen Martin at BAMMA 13 via decision and making quick work of Jefferson George at BAMMA 14 respectively. Wilde knocked out Phil Flynn before signing with Cage Warriors to take on Damien Brown at Cage Warriors 69. He won the thrilling back and forth war via unanimous decision. Wilde went 2-0 in 2015, knocking out Phil Flynn for a second time and earning a decision win in his BAMMA return over Stephen Coll at BAMMA 22. In 2016, he signed with Full Contact Contender and will now face Martin Delaney for the Lightweight title at FCC 15 on March 5th. Good luck Tim!