Europe is quickly becoming a hotbed for women to make an impact in MMA. In 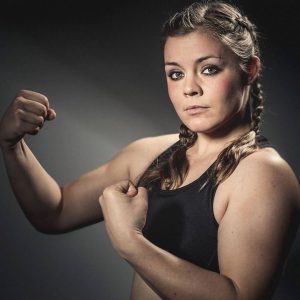 today’s episode of Across The Pond, you will meet a female fighter with ferocious knockout power. A professional since November 2014 and representing Rumble Sports, Anna Elmose owns a 3-0 record with all three of her wins coming via way of knockout. Elmose trains with UFC welterweight star Nicolas Dalby and recent UFC signee Damir Hadzovic.

In her MMA debut at Cage Warriors 74 in London, Anna faced Emma Delaney and knocked her out in the first round in just 19 seconds. In 2015, she knocked out Aitek Emadi in the second round. Then, Anna defeated Mara Romero Borella via knockout in round two. Elmose will look to push her knockout streak to four when she makes her Cage Warriors return to face Stephanie Page at Cage Warriors 75 on April 15th. Good luck Anna!