When it comes to discovering talent in Europe, the UFC has done a great job in blend 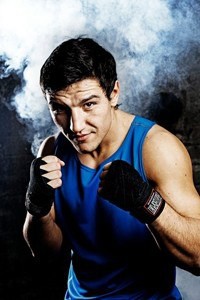 ing new talent  with the well established veterans of European MMA.  In today’s episode of Across The Pond, you will meet a fighter who is looking for his breakout moment when the UFC debuts in Croatia. A professional since November 2009 and representing Rumble Sports, 29 year old Damir Hadzovic owns a 10-2 record in 12 career bouts consisting of five knockouts, three submissions and two decisions. Damir is best known for his two fight stint in Cage Warriors.

In his MMA debut, Damir knocked out Alaan Briefkani in the first round. He won his next three fights which included picking up two submissions over Tim Waage and Jaroslav Poborsky respectively.  In 2012, Damir picked up a decision win over Matej Truhan. He knocked out Nic Osei and submitted Frenchman Thibault Colleuil before signing with Cage Warriors. At Cage Warriors 66 in Denmark, Damir faced longtime English MMA veteran John Maguire and knocked him out in the first round. Then he earned a decision win over Martin Delaney at Cage Warriors 69. In 2015, Damir defeated Ivan Musardo at Venator FC. Damir will look to extend his six fight win streak when he takes on Mairbek Taisumov this weekend at UFN 86. Good luck Damir!