by Myles Painter
in Across The Pond
18

A viper strikes quickly and without warning. In today’s episode of Across The Pond, you will meet a fighter whose quick submission game catches his opponents off guard. 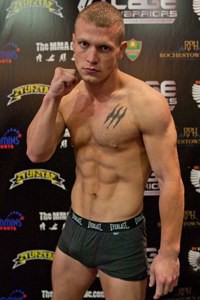 A professional since July 2010 and representing Puhket Top Team and Apex MMA, 29 year old Ian Entwistle owns a 9-2 record in 11 career bouts consisting of seven submissions and one knockout. Ian is best known for his time in Cage Warriors.

In his MMA debut, Ian submitted Anthony Jeffries via rear naked choke in the first round. He knocked out Liam Bennett in round one before submitting Patrick Vickers in just 20 seconds at Cage Warriors 40. Then Ian went on a four fight win streak that included submission wins over Andy Green and Liam James at Cage Warriors 62 respectively. At UFC on Fox 13, Ian faced Anthony Birchak and defeated him via heel hook in the first round. He will look to make it two wins in a row when he takes on Alejandro Perez at UFN 86 on April 10th. Good luck Ian!