The ability to learn new techniques can be very essential to a fighter’s growth and development.  In today’s episode of Across The Pond, you will meet a fighter whose wide ranging array of techniques can put you aw 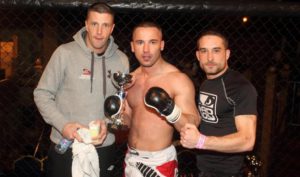 ay on the ground or with viscous knockout power. A professional since November 2013 and representing SBG Manchester under head coach Karl Tanswell, Azi Thomas owns a 6-1 record in 7 career bouts consisting of three submissions and three knockouts.

In his MMA debut at FCC 8, Azi submitted Mitchell Head via rear naked choke in the first round. He also submitted Tom Holland and Elias Hampson in his Cage Warriors debut at Cage Warriors 68 respectively. In 2015, Azi scored a first round knockout over Mick Brennan. He returned to Full Contact Contender to take on Frenchman Chaouki Hannachi at FCC 13 and knocked him out in round one. Then, Azi faced Steve Webster at ICE FC 10 and knocked him out in the first round. Fighters better bring their best stuff when facing this wrecking ball!