Battle of the Best

In Mixed Martial Arts,the road to becoming a top fighter is filled with many challenge 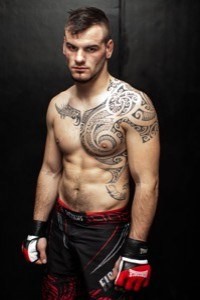 s along the way. In today’s episode of Across The Pond, you will meet a fighter looking to shake things up in the Cage Warriors Featherweight division. A professional since June 2012 and representing MMA Factory, 24 year old Teddy Violet owns a 10-2 record in twelve career bouts consisting of five submissions, two knockouts and three decisions.

In his MMA debut, Teddy submitted Aurelien Baup via rear naked choke in the second round. He also tapped out Aymeric Uneau in round one. Then Violet earned a decision win over Chresus Mokima.  Violet won his next five fights which included wins over Steve Polifonte and Elijah Muhammad respectively. In 2015, he scored consecutive first round knockouts over Tommy McCafferty and Zsolt Fenyes respectively. Violet will now face highly touted Featherweight Paddy Pimblett at Cage Warriors 77 on July 8th in London in what is sure to be a barn burner between two of the best at 145 pounds live on UFC Fight Pass. Good luck Teddy!