The growth of female MMA fighters has increased substantially over the years, especially in 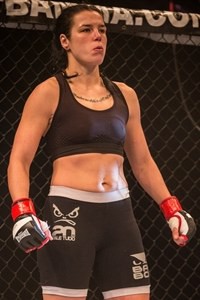 Europe. In today’s episode of Across The Pond, you will meet a rising female prospect looking to continue her hot streak when BAMMA returns to Dublin on September 10th. A professional since September 2015 and representing SBG Ireland, Sinead Kavanagh owns a 2-0 record consisting of one knockout and one decision.

In her MMA debut at BAMMA 22 in Dublin which marked the first women’s bout in the promotion’s history,  she knocked out Dutch fighter Hatice Ozyurt in just 17 seconds. Then Kavanagh earned a split decision win over Frenchwoman Zarrah Fairn Dos Santos at BAMMA 24. She will look to extend her win streak to three when she faces Polish fighter Katarzyna Sadura at BAMMA 26 on September 10th in Dublin. Good luck Sinead!