On September 3rd, the UFC will venture to Hamburg, Germany for the first time and the card is chalked full of talented prospects and savvy  European veterans. In today’s episode of Across The P 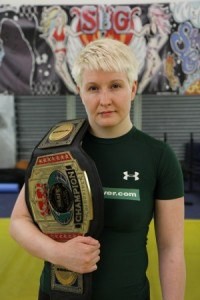 ond, you will meet a female ground specialist and European MMA veteran looking to wow the German crowd. A professional since May 2007 and representing SBG Ireland, 28 year old Aisling Daly owns a 16-6 record in 22 career bouts consisting of eight submissions, five knockouts and three decisions.

In her MMA debut, Daly submitted Nicole Sydboge in the second round. Then she knocked out Annika Sitter in just 22 seconds. Daly won her next seven bouts which included wins over Nadia van der Wel and Tevi Say respectively. In her Cage Warriors debut, she defeated Molly Helsel at Cage Warriors 39. Daly won her next three bouts via submission which included wins over Kelly Warren and Angela Hayes respectively. At Cage Warriors 63 in Dublin, Daly submitted Karla Benitez via armbar in the second round. In 2014, she was selected to be a part of TUF 20 and was the final pick of coach Anthony Pettis. In episode six, she knocked out Angela Magana in round three. In her official UFC debut, Daly submitted Alex Chambers via armbar in the first round. At UFN 76 in Dublin,she defeated Ericka Almeida via unanimous decision. Daly will now face Michelle Waterson at UFN 93 on September 3rd. Good luck Aisling!