The Emerald Isle has a reputation for producing some of Europe’s top prospects. In tod 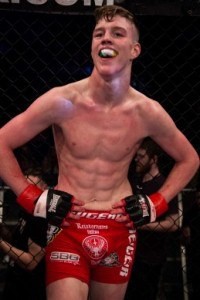 ay’s episode of Across The Pond, you will meet an Irishman whose dynamic finishing power makes him one of the country’s top prospects. A professional since September 2015 and representing SBG Ireland, Dylan Tuke owns a 3-0 record consisting of two submissions and one knockout.

In his MMA debut at BAMMA 22 in Dublin, Tuke submitted Adam Caffrey via rear naked choke in the first round. Then he knocked out Mark Andrew in round one at BAMMA 24. Dylan returned to his submitting ways when he tapped out Adam Ventre in the main event of Shinobi War 8 via rear naked choke in the second round.  Dylan Tuke is a fighter on the fast track. Be careful when tangling with this explosive fighter, or you will pay a heavy price!