by Myles Painter
in Across The Pond, UK MMA News
20

When a fighter deals with a layoff, it makes them even more determined to come bac 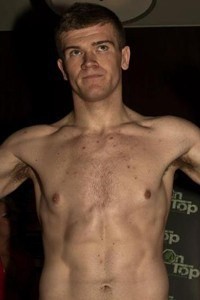 k stronger than ever.  In today’s episode of Across The Pond, you will meet a fighter looking to obtain Welterweight gold at On Top Weekender on October 22nd after a myriad of setbacks such as injuries and fight cancellations.  A professional since June 2011 and representing Higher Level Martial Arts and D Unit ( both gyms are part of DNFT) under coaches James Doolan and John Nicolson, 25 year old Alan Johnston owns a 7-2-2 record in nine career bouts consisting of three submissions, three knockouts and one decision.

At On Top 3 Johnston submitted Chris Carmichael in the first round via guillotine choke. Then he knocked out Paulo Jordan at Sportfight Scotland. Alan earned consecutive submission wins over Christopher McDonald and Ousmane Sidibe respectively. He knocked out German fighter Jessin Ayari in the second round at On Top 5.  At Cage Warriors 50 in Glasgow, Alan faced Aaron Wilkinson and defeated him via unanimous decision. In 2016 at MMA Total Combat 68, Alan made his triumphant  return to the cage by knocking out Ashley Gipson in round one in just 28 seconds. Johnston will now face Danish fighter Thomas Jessing for the Welterweight title at On Top Weekender on October 22nd. Good luck Alan!

Q and A with Alan-

What has been the hardest part of coming back from your injury?

The hardest part about coming back from injury is being patient. You have to respect the time it takes. Cutting corners and trying to rush isn’t an option. I enjoyed the challenge as my injury was serious and from the day I got it fixed I knew I would fight again even though my surgeon said I never would. But it wasn’t easy coming back.

What are your thoughts on your opponent Thomas Jessing?

Thomas Jessing looks a lot more comfortable than what his record shows. He is inexperienced by record but looks as if he has had 15 fights. You don’t get bad Scandinavian pro fighters with positive records. I’m excited about this challenge.

I had a really bad experience when I was 16 and at school. I got beaten up by a guy in front of his mates and it nearly escalated into weapons being used by him. I was shaken up for a long time and my brother- in- law took me to our local gym which so happened to be the Dinky Ninja Fight Team. The head coach was a guy called John Nicolson. He took that fear I had of fighting outside and used that to turn me into what I am today. Someone that loves fighting! (Not on the streets but in the cage).

What is your favorite MMA bout of all time?

My favourite fight of all time has to be, Trigg vs Hughes. Matt Hughes was badly losing that fight and comes back from being in deep water to ending the fight.