The ability to adapt is the key for success in any sport.   In today’s episode of Across The Pond, you will meet a fighter whose willingness to embrace and adapt to any challenge that stands in his way makes him no stranger to the spotlight. 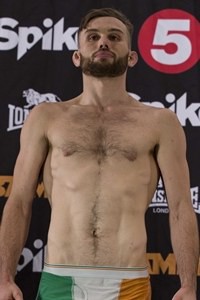 In his MMA debut, Myles defeated Rob Freeman via unanimous decision. He defeated his next three opponents via decision which included wins over Michael Doyle and Darin Hughes respectively. Then Myles knocked out Marcin Puganowski followed by a second round submission win over Martin Begley. Price knocked out Stephen Coll at Immortal Fighting Championship 4. Myles returned to his submitting ways when he tapped out Kieran Davern in round three via rear naked choke at Battlezone Fighting Championships 10. In 2016, Price faced English submission artist Mario Saeed at BAMMA 24 in Dublin. Price defeated Saeed via knockout in the second round. When it comes to perseverance through adversity,   the man they call ”Magic” shines in the spotlight with his dangerous submission game and hard hitting knockout power!