In Mixed Martial Arts, fighters must dig deep in order to overcome  serious injuries.  In today’s episode of Across The Pond, you will meet a gritty, resilient fighter whose perseverance has turned him into one of FCC’S top 135 pound prospects.  A professional since November 2014 and repr 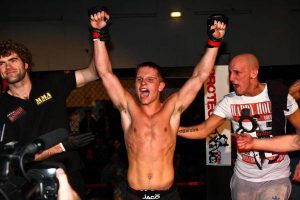 In his MMA debut at Budo 6, Sam defeated Nordic fighter Jakob Grzegorzek via unanimous decision. Then he knocked out Reece Street in the first round at Budo 9. In 2016, Spencer faced Cage Warriors veteran Bryan Creighton at FCC 15 and defeated him via unanimous decision. Sam will look to extend his winning streak to four when he squares off with Ionut Raducanu at FCC 17 this weekend. Good luck Sam!

Have you bought your tickets for FCC – Full Contact Contender 17?

Saturday, September 24 at 4 PM at Event City Trafford Centre Manchester
tickets available at http://www.fccmma.co.uk/#!tickets/cee5
Use promotional code MMAUK for a 5 percent discount on any ticket/table purchased. When viewing shopping cart click add coupon and type the code MMAUK to activate the discount.