Cage Warriors has reaffirmed their status as the top promotions in Europe by bolstering their roster and divisions with a vast array of European talent. In 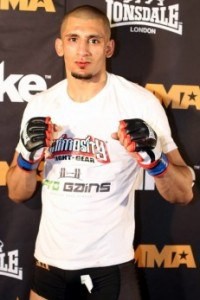 today’s episode of Across The Pond, you will meet a recent Cage Warriors signee looking to make waves in Cage Warrior’s loaded Featherweight division.  A professional since April 2015 and representing Fearless MMA in Birmingham,England  Aiden Lee owns a 2-1 record in three career bouts consisting of one knockout and one decision.

In his MMA debut at BAMMA 20, Aiden defeated Adam Jahovic via unanimous decision. Then he knocked out Polish fighter Krzystof Adamczyk in the second round. In 2016, Aiden was one of eighteen fighters that came to terms with Cage Warriors in a attempt to add depth across all divisions. Big things are expected from this fearless Featherweight heading into 2017!