In an attempt to breathe new life into the UFC Flyweight division, this season of The Ultimate Fighter will see champions from various promotions compete. The winner will get a shot at Demetrious  ”Mighty Mouse” Johnson for the UFC Flyweight title at the season’s finale on December 3rd. In today’s episode of Across The Pond, you will meet one of the competitors hoping 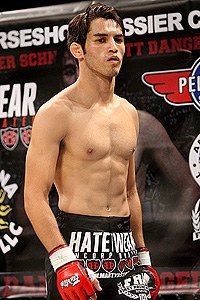 for his shot at glory against the champion. A professional since September 2012 and representing American Top Team in Coconut Creek Florida,   26 year old Matt Schnell owns a 10-2 record in twelve career bouts consisting of five submissions, two knockouts one decision and one win via disqualification. Matt is known for his time in Legacy FC.

In his MMA debut at Legacy FC 14, Matt defeated Ryan Hollis via decision. Then he submitted Marcus Dupar via armbar in round one at Legacy FC 15. Schnell also tapped out Roger Reyes before knocking out Latral Perdue.  Matt picked up back to back submission wins over Thomas Coleman and Chris Meyers respectively. Schnell defeated Vanderlei Carvalho Leite via knockout in just 19 seconds at Legacy FC 42. Matt won his next bout with Johnathan Martinez at Legacy FC 49 via disqualification after Martinez landed an illegal knee. Schnell became the interim Legacy FC Flyweight champion with a first round armbar submission win over Klayton Mai at Legacy FC 52. Matt was chosen sixth overall by coach Henry Cejudo in the debut episode of TUF 24. In episode six, Schnell faced Matt Rizzo of team Benavidez and submitted him via triangle choke in round two. Make a mistake against ”Danger” and you will get burned!