After Wednesday’s announcement that five UFC fighters and former Bellator CEO, Bjorn Rebney were forming the Mixed Martial Arts Athletes Association. The announcement was made during a two-hour conference call hosted by Georges St-Pierre, Cain Velasquez, Tim Kennedy, T.J. Dillashaw and Donald Cerrone. MMAFighting.com contacted the UFC for a response to the announcement.

A UFC official said, “We respect all of our athletes and are always open and willing to hear their thoughts on how to improve the sport.” 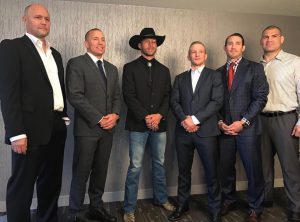 For more on information on the Mixed Martial Arts Athletes Association. , click here.