by Myles Painter
in Across The Pond, UK MMA News
14

Mixed Martial Arts is a sport where you can’t play it safe. Sometimes, you just need to roll the dice and take a chance.  In today’s episode of Across The Pond, you will meet a tenacious fighter whose tremendous endurance and fast paced ground 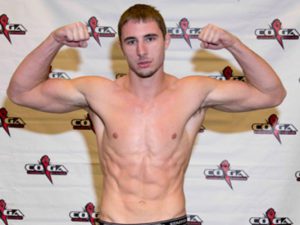 game has turned him into one of Nevada’s rising Light Heavyweight prospects. A professional since November 2014 and representing Syndicate MMA, 28 year old Cory Hendricks owns a 3-1 record in four career bouts with all three of his victories coming via submission.

In his MMA debut, Cory submitted Thomas Hoeper in the second round. He also tapped out Derek Luna Harris via rear naked choke in the first round. At WSOF 22, Hendricks submitted Julio Hinojosa in round one.In 2016 Cory was selected to be a part of TUF 23. To get into the house, he defeated Marcel Fortuna via unanimous decision and was the fourth male selection of team Claudia. In episode two Cory faced Khail Rountree and submitted him via rear naked choke in round one. He was slated to face Josh Stansbury in the semi finals but dropped out in episode ten due to a neck injury. Look out for Cory to be stronger than ever in 2017!