Mixed Martial Arts is a very unpredictable sport where fortunes can change on a moments notice. In today’s episode of Across The Pond, you will meet a tenacious ground specialist whose unpredictability and stifling submissions  keeps his opponents guessing at every turn. 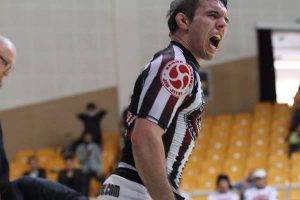 A professional since January 2014 and representing Lovato’s School Of Brazilian Jiu Jitsu And MMA, Justin Rader owns a 5-2 record in seven career bouts consisting of two submissions, two knockouts and one decision.

In his MMA debut, Justin submitted Andrew Lockett in the first round. Then he knocked out Craig Campbell in round two. At Legacy FC 35, Rader submitted Hector Arteaga via rear naked choke in the first round. In 2016, Justin defeated Aaron Robinson via unanimous decision at Legacy FC 54. At Legacy FC 62, he defeated Mike Maldonado via TKO in round one. This aggressive warrior is definitely a prospect with a tremendous upside going into 2017!