GSP looking huge in his preparation for Michael Bisping

George St-Pierre will be moving up to take on current UFC Middleweight champion Michael Bisping some time later this year – and it is clear to see that the former Welterweight king has started to put on some weight to bridge the gap in size.

“I have always been the same weight. When I knew that we were going to fight Michael Bisping, when I signed the contract, that’s when I decided to put on a little more weight,” St-Pierre told reporters during a recent Q&A with sponsors. “I won’t be able to put a lot, because I’m a natural guy. But I’m already a little bit bigger than I was.

He went on, “I’m the biggest I’ve ever been right now in my life. Bisping will still be bigger than me, but I’m confident that this will help.” 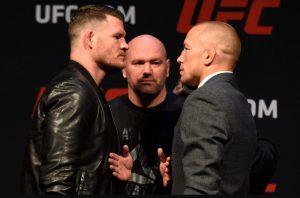 “It’s not my natural size, I haven’t been this big in my life. But as a man, I’m going to be honest, we want to have bigger muscles and want to be big, so I’m happy to be a little bit bigger.”

Though Bisping vs. St-Pierre still doesn’t have a date, both fighters continue to prepare for the scheduled bout.