Josh ‘Crazy Horse’ Reed is the latest in a wave of contenders to come out of Wales in the last 18 months. A Blaenavon native, fighting out of Tillery Combat, Josh holds a perfect record of 6-0, and is fresh off the biggest win of his career against Martin Sheridan. So how has the 25 year old prospect been preparing for his upcoming bout with Gavin Kelly, at Cage Warriors 83, in Newport on May 6th? 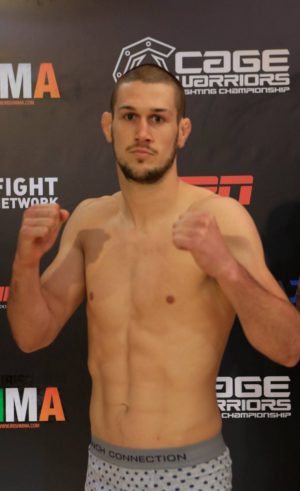 Hi Josh, you’ve got a big fight coming up CW83 against Gavin Kelly. How are you feeling leading into this match up?

JR: I think it’s a good fight for me. They’re saying it’s a tough test, but I believe you can’t get any harder than my last fight with Martin Sheridan. It went the distance, and I learned a lot from that in terms of what I’ve got to work on. Preparation has gone perfect, I know everyone says it but it’s gone really well. The team I’ve got at Tillery Combat are brilliant, all top boys. You’ve got UFC’s Jack Marshman, and a lot of other boys knocking on the door.

So how important is it for you to be around these types of fighters, training on a daily basis?

JR: It really is brilliant, it gives you that drive to know you’re getting somewhere with it, seeing yourself and the boys perform. You just want to be like them. I want to follow Jack if I’m honest, going to the UFC – that’s my dream. Jack has really lifted everyone at the club, from the amateurs right up to the pro’s.

Your last match up against Martin Sheridan was an epic fight. How important was it for you to have a fight like that at this point in your career?

JR: It’s what I needed because I’ve been taking them out pretty easily, subbing them, and no-one had seen my all round game because it’s been ending fast. So I was glad I went the distance, to see that I could do three rounds under pressure- with a good fighter coming on to me. It was a good experience and showed that I belong at this level. Hopefully I’ve put things right and I can get a stoppage this time, but I know he’s another tough lad and we’ll see how it goes.

Have you prepared for anything specifically for this fight?

JR: Not really, my cardio’s always on point and just working every area. I’m quite obsessed with bringing it all together as one. I started all those years ago as an MMA fighter, so I don’t think about just boxing or working on one thing, because then my ground game could be falling behind. So I bring it all together. As many sessions per week as I can, in all areas.

Any predictions for the fight?

JR: From what I’ve seen of him he’s seems to be a wrestler and a ground fighter, similar to what people class me as. Sometimes that clashes and it becomes a stand up fight, but to be honest I’m happy wherever it goes.

And what are your ambitions for the future within the sport?

JR: To keep winning and doing what I’m doing. If I keep winning, surely at 7-0
I can’t be far off a Cage Warriors title shot. That’s what I’m going to be asking for. And you never know, a year or two down the line get signed for the UFC. That would be the dream, to fight in the Premier League of my sport.