by Myles Painter
in Across The Pond
20

Many winners of The Ultimate Fighter h 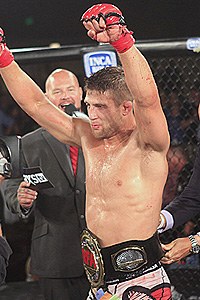 ave gone on to have successful careers inside the octagon, with some achieving Mixed Martial Arts ultimate pinnacle. In today’s episode of Across The Pond, you will meet a tough, bull-like fighter looking to impose his dominance in the UFC’S Middleweight division. A professional since June 2012 and representing K Dojo Warrior Tribe, Andrew Sanchez owns a 9-3 record in twelve career bouts consisting of five knockouts, two submissions and two decisions.