There have been many standout collegiate  wrestlers that have gone on to achieve huge success in MMA like UFC veteran Phil Davis. In today’s episode of Across The Pond, you will meet a lion-like fighter whose flattening knockout power has him roaring through Bellator MMA. A professional since November 2016 and representing Dethrone Mixed Martial Arts Fresno, Ed Ruth owns a 3-0 record with all three of his victories coming via knockout. 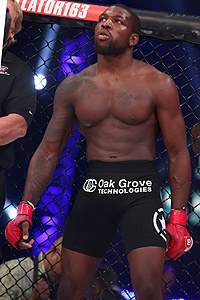