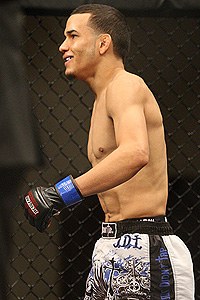 CES MMA has made their mark on Northeastern  MMA with a combination of exciting prospects and bell to bell action. In today’s episode of Across The Pond, you will meet a fighter whose propensity for explosive finishes has cemented his status as one of Connecticut’s top prospects. A professional since January 2015 and representing Underdog Mixed Martial Arts, 26 year old Carlos Candelario owns a 7-0 record consisting of three knockouts, two knockouts and two decisions. Carlos is known for his time in CES MMA.

In his MMA debut, Carlos submitted Josh Baker in the first round via rear naked choke. He defeated Jessie Gutierrez via unanimous decision at CES MMA 31. At CES MMA 34, Carlos knocked out Luay Ashkar in the first round. He submitted Roosevelt Archie via guillotine choke in round one at CES MMA 36. Carlos also tapped out Miguel Restrepo via rear naked choke in the second round at CES MMA 41. At CES MMA 44, he knocked out Timothy Wheeler in the first round. At Dana White’s Tuesday Night Contender Series 4 Carlos faced submission specialist Ronaldo Candido and defeated him via unanimous decision. ”The Cannon” has plenty of ammunition to deal out destruction at Flyweight!

The Curious Case of Nate Diaz