by Myles Painter
in Across The Pond, UFC
41

Dana White’s Tuesday Night Contender Series has allowed the future MMA stars of tomorrow to showcase their talents in front of a national audience. In today’s episode of Across The Pond, you will meet a Middleweight missile looking to make a explosive impression at UFC On Fox 26 on December 16. A professional since May 2014 and representing Syndicate Mixed Martial Arts under the guidance of head coach John Wood, 27 year old Julian Marquez owns a 6-1 record in seven career bouts with all six of his victories coming via knockout. 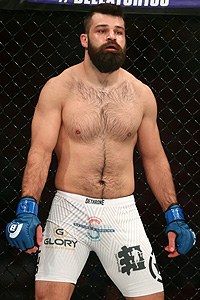 In his MMA debut, Julian defeated Charles Rooks via TKO in the first round. He also defeated Jessie Jones via TKO in round one. Julian defeated his next two opponents in Matt Hamill and Idrees Wasi respectively. At LFA 12, he knocked out Cameron Olson in the first round. In the main event of Dana White’s Tuesday Night Contender Series 4 Julian knocked out Phil Hawes in the second round and punched his ticket to the UFC in the process. At UFC On Fox 26 on December 16, Julian will face Brazilian Vitor Miranda in a Middleweight clash live on Fox Sports 1. Good luck Julian!