by Mick Kane
in MMA News
33

In what promises to be a night of great Muay Thai and K1 bouts it was announced that RAMA has partnered with YOKKAO as co-promoters.

YOKKAO said on their website regarding the joint promotion –

“For this occasion, YOKKAO Next Generation will actually be held in partnership with the local promoter, Robert Morrison and promoted together as the Rama show. The event is set to feature A class, B class, C class and even junior bouts. With YOKKAO now thrown into the mix, the fighters now have an even bigger incentive to do their best in the ring. YOKKAO has been the most active brand in terms of finding young talents and promoting them on the global stage. One of the most prominent fighters discovered from the NextGeneration is none other than Scotland’s very own Spencer Brown who was talent-spotted in the event 2 years ago. This will be a golden opportunity for fellow Scots to join the prestigious YOKKAO Next Generation Team or fight in the international events.

YOKKAO is more than a Muay Thai gear and equipment company – it is a trusted Muay Thai brand operating at a full 360 degrees with events, distributors, affiliated training centre network, and more exciting developments in the pipeline. YOKKAO is expanding its network of promoters all around the world and the brand is set to only get bigger than ever before.”

Robert Morrison, who is promoting the show will also be fighting, when he takes on Pete Scott.

I asked Robert his thoughts on his fight and what he knows of his opponent.

“Yeah, his name is Pete Scott from Aberdeen Combat Centre he’s spent a few year living over in Thailand and fighting most of his fights over there. This is his first fight in the UK in 5 years at 58 kg, a weight I’ve not been beaten at. I’ve stopped 3 fighters in a row at that weight so looking to keep it up. Pete is a strong fighter, good experience behind him, good clincher and small so his strength will be in the clinch I think.”

Look out for interviews with Stephen Irvine and Jenna Ross to come in the next few days. 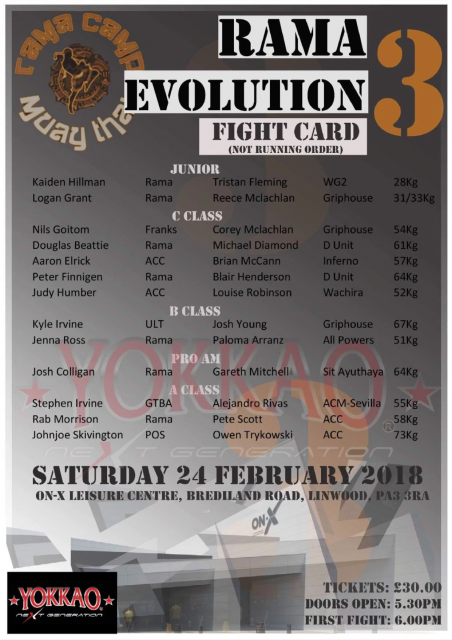