UFC 3 the video game recently announced its latest addition to the list of characters available on the game.  None other than the ‘Veteran Voice of the Octagon’, Bruce Buffer.  Bruce is swapping the microphone for the 4 oz UFC gloves.

The UFC games are known for adding former fighters such as Royce Gracie and Matt Hughes.  As well as adding in non-fighters as playable characters. Recently adding in UFC president Dana White to the game.  White is available from welterweight up to heavyweight division.  Turning fantasy into gaming reality.  There is something very satisfying about landing a big overhand right from Dana White onto Connor McGregor’s chin.  Whilst furthermore there something even more satisfying seeing Francis Ngannou landing the uppercut from hell on the UFC president.

Bruce Buffer, however, is only available in the middleweight division of the game.  In order to play with the UFC announcer, you must first unlock him.   Below is a list of steps you must do in order to unlock Buffer:

Once Buffer is unlocked he is available in all game modes.  His general information is amusing at first to read before he fights.  Buffer’s cage nickname is ‘It’s Time’ whilst he is also 60 years old (real-life age).  Showing a considerable age gap between his opponents.   Buffer’s stats are respectable.  The four main attributes for a fighter on the game consist of Striking, Grappling, Stamina and Health.  Buffer’s rating is as followed: 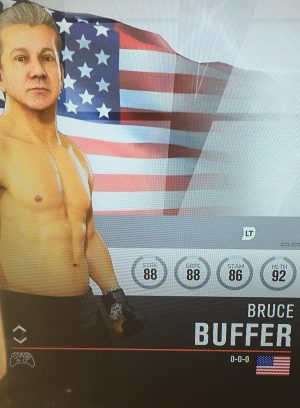 A respectful rating on each section.  Enough rating to hang with the best the UFC game has to offer.  Game mode with Buffer in very entertaining.  He can have good stand up and takedown defence.  His arsenal of attacks is very exciting.  Buffer can land spinning elbows, superman punches and even spinning heel kicks. Not bad for a 60-year-old?

However, the best part of the Buffer experience on the game is his taunt.  If you press the up button on your controller Buffer will begin his taunt.  Copying his main event ring announcement as a taunt as he shouts ‘It’s Time!’, before skipping backwards and jumping up and down in traditional Buffer fashion.  The amount of movement in the taunt seems to very distracting for online opponents, who appear to throw a punch or a kick but miss due to Buffer’s movement in the taunt, leaving them open for the counter-attack.

Overall Buffer is a fun downloadable character to play with.  He is good with his hands and kicks, whilst also having a good chin with 92 health.  When Buffer has been taken down he does seem to have a disadvantage on the ground when playing online.  However, he definitely has an overhand which can knock any fighter on the game out if you get him back to his feet.

Hopefully, this is not the end of the additional characters to be added to UFC 3.  The additional characters I believe is one of the reasons that make gaming so much fun.  Being able to play out your fantasies.  It will be interesting to see who else UFC 3 will add to the games roaster.  Personally, I would like to see Megan Olivi (PR for UFC) and Ariel Helwani (MMA journalist) added to the game.  The battle between Helwani and White could then finally be settled in the octagon.  However, Helwani is not a UFC employee.  Making this just an optimistic hope.

If you are a fan of the game make sure you unlock Buffer!  Even if it just to taunt your opponents.  Bruce ‘Its Time’ Buffer will not disappoint you.