by Mick Kane
in UFC
0

Already streaming the best live action in not only live mixed martial arts, but also submission grapping, kickboxing and Muay Thai, UFC FIGHT PASS has further expanded its offering to include an exciting new take on the centuries old martial art of karate.
FIGHT PASS confirmed it will live-stream events from the exciting new Karate Combat promotion, beginning with next Saturday’s event which takes place in Athens, Greece.

Karate Combat features elite level karateka competing in a specially designed slope-sided fighting pit, using full contact (aka full-force) rules. That ruleset, combined with the promotion’s fondness for exotic locations (the July 28 event takes place in the ancient Zappeion Courtyard, the site of the first modern Olympic Games back in 1896) results is a unique and wildly entertaining combat sports event.UFC Hall of Famer – and 2nd dan karate black belt – Bas Rutten serves as the promotion’s color commentator, and the former UFC heavyweight champion believes this 21st century incarnation of the ancient martial art is the next big thing in combat sports.

“This is a brand new sport within traditional karate,” Rutten began. “This isn’t the points-system you may have seen before – this is full-contact competition with full-force combinations, spinning back-fists, flying kicks, sidekicks and amazing action.

“The karate athletes have been waiting for this – the chance to show the world what elite karateka (karate experts) can really do. Some of the competitors told me they were frustrated fighting in the points-style, and are so excited to let it all hang out under these new Karate Combat rules. This is their platform to fight under karate rules, in a beautiful setting, and using full-contact rules. 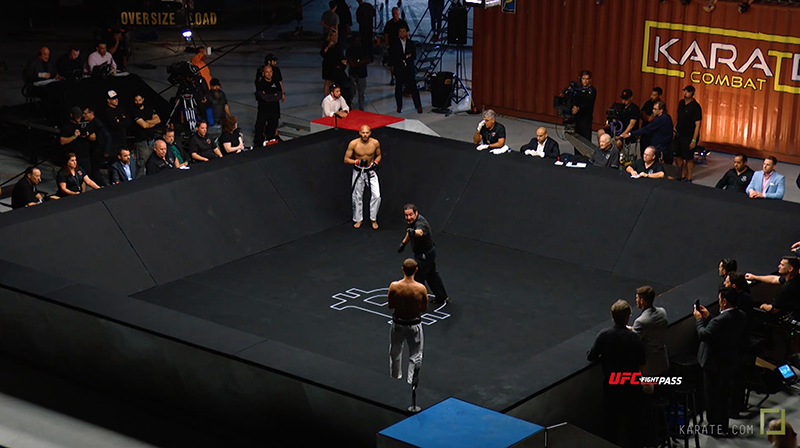 “While hardcore MMA fans will be familiar with many of the techniques – and maybe even know some of the Japanese names for the strikes – there are also some major differences to what you see in MMA, kickboxing or Thai boxing. There are no uppercuts – every strike is at range, which makes for great knockdowns and knockouts. Leg kicks are allowed, but not above the knee. And you see a lot more spinning back-fists, jumping kicks and spinning kicks. Ground and pound is allowed, but the referee will halt the action after five seconds and restart the fight on the feet.”

Throws and single-leg takedowns also feature heavily. Clinching and striking is allowed, but any clinching without immediate action (striking or throwing/sweeping) is considered stalling and a foul. 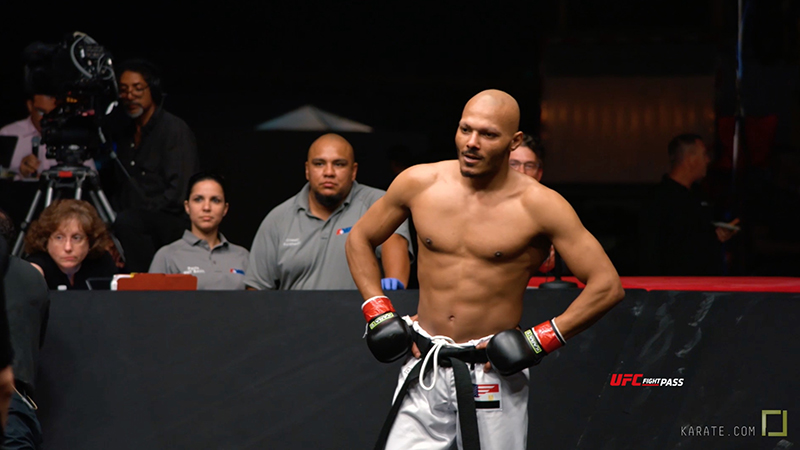 And, thanks to Tank Abbott’s efforts vs Cal Worsham at UFC 11, no modern combat sport rulebook is complete without expressly forbidding fighters from picking their opponent up and throwing them out of the fighting area.

The full Karate Combat ruleset can be found here: https://www.karate.com/wp-content/uploads/official-full-contact-karate-unified-rules-and-regulations-.pdf

Another key aspect to Karate Combat is the fighting surface. Known as the Pit, the unique field of play measures 6.5 meters v 6.5 meters of flat canvas, and is set in and surrounded by a ramped area which is also considered within bounds. 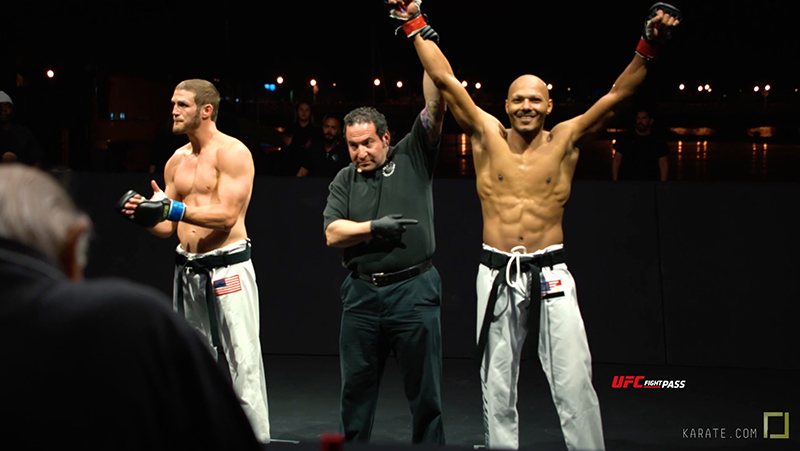 In the first event, which took place in Miami in April, several karateka made use of the ramped area to escape an attack or for additional leverage behind a flying kick or punch.

Rutten is excited by the prospect of fighting learning to use the ramps to augment their offense in the future. He said: “As we keep on putting on more and more shows, I expect we will see more fighters use the ramps to help their techniques. If ‘Showtime’ Pettis can do flying kicks and knees off the (Octagon) imagine what someone can do off the ramps in Karate Combat.”

Rutten, of course, has commentated for over a dozen combat sports promotions since his own fighting career began winding down in the late 90s. Most notably, he served as the English-language color commentator for the iconic Japanese MMA promotion PRIDE FC – but says Karate Combat is a chance to re-engage with his original martial art.

“The first martial arts class I took – motivated to get back at bullies to school – was Kyokushin Karate. I eventually got my second-degree black belt in Kyokushin and I’ve always loved karate. This promotion – Karate Combat – take every aspect of all the styles of karate and gives karateka (karate experts) a great platform to compete.”

Michael DePietro, CEO of Karate Combat, added: “We are excited to have UFC FIGHT PASS as a distribution partner and we appreciate their interest in our brand. Combat sport viewers around the world can witness the new sport of professional karate on July 28th at Karate Combat: Olympus.”