by Jordan Ellis
in UFC
0

UFC Sao Paulo has taken another hit just six days out from the event. Veteran Light Heavyweight Jimi Manuwa (17-4) has been forced out of his scheduled main event slot against Thiago Santos (18-6) due to an undisclosed injury.

Manuwa who had already made the trip to Sao Paulo for fight week, expressed his disappointment to his Twitter followers in the early hours of Monday morning. The official statement promised in the below tweet is yet to come. As of now Jimi’s removal from the card and his reasons for being “pissed” remain a mystery. 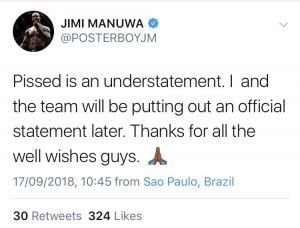 The card was originally to be headlined by Manuwa in a top of the division clash against contender Glover Teixeira (27-7). With both of the fighters having pulled out of the match-up, the UFC have been left scrambling to save the card.

Thiago Santos, a Brazilian native will now face American Eryk Anders (11-1) in a Light Heavyweight showdown. The fight will represent a step up in weight class for both men who have previously been campaigning in the UFC’s Middleweight division.

Santos picked up a unanimous decision victory in his most recent match-up, in an exciting fight against newcomer Kevin Holland. Whilst Eryk Anders bounced back from his lone career loss vs Lyoto Machida, to score a picture perfect head kick knockout over Tim Williams, for which he earned a post fight bonus as well as acquiring a welcome addition to his highlight reel.

Thiago Santos and Eryk Anders headline a UFC Fight Night 137 in front of a sold out Sao Paulo crowd.With the long time campaigners of Light Heavyweight falling out an opportunity has presented itself to two of the divisions newcomers. The chance for one man to catapult himself into the the minds of fight fans and establish himself as a force to be reckoned with at 205lbs.