I first met Sinead Kavanagh on BAMMA where I enjoyed my role as commissioner and always remember bringing her a bottle of water as she sat alone just outside the cage, looking at it and surveying her surroundings. A quiet, polite fighter that had me entranced at the powerful force that she is, pounding her opponent to claim a dominant victory that night… 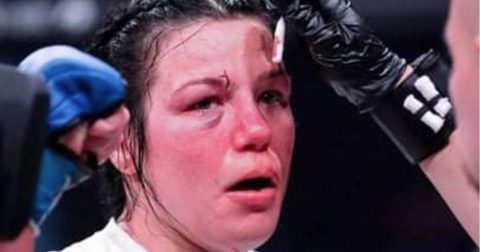 I will never forget the sound of Sinead’s strikes and the impact they had on this and other opponents.

I was intrigued by this powerful force and had kept in touch since the BAMMA days so was very happy that Sinead had agreed to answer the questions that I had carefully put together.

What followed was a very touching portrait of a warriors tale…

Sinead comes from a family of 5 with Sinead in the middle. Growing up, she got into arguments and fistfights like most children. 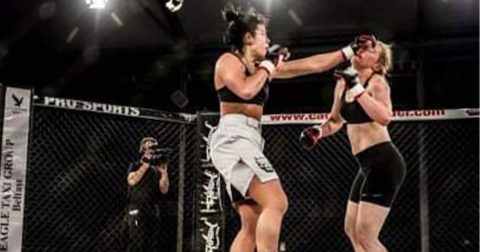 I asked Sinead what was life like back then, she replied:

“I was a tomboy so played football, rounders, kick the can, so many digs were thrown in play. I tried to join a boxing club around my area when I was 8 years old and never forgot the day I walked in, asking to join and an old man chased me out saying “We don’t take girls” so away I ran and cried and joined Karate instead, alone. 10 years later that man became my boxing coach.”

I asked Sinead what motivated her as a child growing up as a tomboy, Sinead recalled these memories by saying “My motivation was being able to handle myself, being called names for being a tomboy got me into fights. I pretty much went to war back then.”

Sinead has had a tough life but not one to dwell she puts her heart and soul into training, and alongside Sinead trains her son Leon.

I was intrigued to find out how Sinead coped being a young parent and becoming homeless at that time.

Sinead told me “I had Leon whilst I was still at school, I then went back to get my leaving certificate and very sadly Leon’s Dad had passed away and I had trouble back home. My mother had formed a drinking habit due to the tragedy of her brother and sister being killed in a car crash that she had survived so I became homeless but took Leon training in his pram with me, I had no choice.” 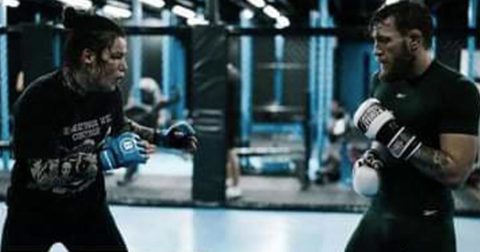 Over the years Sinead has trained and successfully competed in karate, kickboxing, boxing and of course MMA, which gave Sinead Kavanagh her name but Sinead still thinks that she doesn’t get the recognition she feels she deserves. Training alongside teammates such as Conor McGregor, Sinead is a grafter and takes her commitment to the sport to a higher level.

“My coach John Kavanagh is the man with the knowledge, who knows every single detail about one single move. I only have him to be thankful to for giving me this opportunity and hopefully greater things. I look up to John and Conor.John a man who picks out the finer details in this game and Conor, a fighter who has taken this game to another level”.

Sinead also feels her fight record does not match her fight ability.

Sinead tells me ” I‘m a mean bitch when it comes to fighting. I’ve been done over on officials decisions and feel I deserve a big name, a big fight. I’m more than ready for it “.

Sinead’s plan is to fight as long as she can as she‘s scared of what might happen when she hangs up her gloves. I did ask Sinead what her saying in life would be and Sinead gave me this answer.

“Lifes a rollercoaster, enjoy the ups because the downs will follow”.

We ended the interview on a positive when I asked this machine who her biggest influence is.

Sinead’s humour shone through with this reply.

“My biggest influence is me. Is that bad? lol “.

Great words to end this interview and words, to sum up, Sinead’s personality and life so far and an insight into the fighter I first saw sitting around that cage. Just watching.

Sinead would like to thank her teammates and coach John Kavanagh and her family.

Thank you to Sinead for her time and openness.

Sinead’s next outing will be around October time.

BRAVE CF: The only organization to host events in 20 countries in less than 4 years of operations