I had the joy of chatting with Mike Reay who has recently earned his black belt. Mike is the head coach at LOBO BJJ. He is a top-class competitor and has competed in a multitude of BJJ events.

Kieran – I appreciate you taking the time Mike, nice to meet you mate.

Mike – Hi, hope you are well and it’s no problem at all.

Kieran – I’m good thanks. So, how did your BJJ journey start and what got you into it?

Mike – So I started Judo in 2009, competed a lot up and down the UK. The judo club I trained at was big into Newaza so from the off set, there was a large emphasis on my ground game. I continued to train for many years and one of my training partners at the time was already training jiu-jitsu. He’d said that he thought I should come and give it a try and that my style was much more suited to jiu-jitsu as I was playing guard during the Newaza. I then tried my first jiu-jitsu session and was instantly hooked.

Kieran – After one session? It’s incredible how BJJ can take ahold like that. When somebody asks what BJJ is (maybe not these days) people usually say it’s like judo but it isn’t. Why do you think that comparison is made?

Mike – Yeah first session and was instantly hooked. I think the comparison is purely due to the fact everyone knows what judo is and to try and explain BJJ can be a lot harder.

Kieran – Absolutely. I almost forgot I believe a congratulation is in order as you have recently received your black belt. Can you tell me how it feels to finally achieve such an incredible feat that not many people achieve and what does it mean to you?

Mike – Thanks, yes I was awarded it at the weekend. It was a little emotional. The belts have never really been a goal, I believe this is why blue belt has such a high drop out rate, a lot set belts as goals and once they achieve that they feel they’ve achieved their goals and end up quitting. I’ve always looked at it differently, yes the belts are there and are milestones on the journey I am just constantly looking to improve not just myself but my students as well. I am really looking forward to testing myself at the highest level.

Kieran – It’s amazing the passion you show in improving yourself and helping your students progress also. So, LOBO BJJ was founded three years ago. You talk about belts not being goals, but was opening LOBO a goal? How did that come about?

Mike – Yes so officially I opened LOBO BJJ September 2017. Opening my own academy wasn’t really a goal right then. I was approached to start teaching a local MMA team no-gi once a week August 2016, that took off really well so I then added a gi session as well and then it really just snowballed from there to where we are now.

Kieran – Incredible I’m happy that it has gone well for you. You have said you look forward to testing yourself. Have you always had this approach and is that your mentality when it comes to life in general?

Mike – I would say this has been something that jiu-jitsu has taught me. You don’t get good or achieve anything in life if you don’t work for it. In the gym, always pick the toughest rounds. In competition, you want the toughest opponent. Making yourself feel comfortable in these uncomfortable situations is what will truly bring out the best in you. Jiu-jitsu isn’t meant to be easy that’s what makes it so rewarding. I would say anyone can achieve anything in life if you want something, set your mind, work hard. Anything is achievable.

Kieran – That’s very well said. Can we talk a bit about competing? You have competed in so many different competitions – local, submission only, and international. Which would you say you prefer and how much do these competitions differ in terms of rewards and set-up?

Mike – So firstly, anyone thinking of competing I would recommend definitely trying it. It becomes very addictive and truly helps highlight any holes in your game. The first few competitions you’ll most likely suffer quite a lot of mixed emotions, nerves etc this gets easier. I did a lot of judo competitions early on, suffered all the mixed emotions and nerves etc. So when I then started jiu-jitsu competitions I’d already experienced all of the above. In terms of physical competitions I’ve competed all over locally, internationally, and on submission-only shows. They are all fantastic experiences no matter which you do. I really enjoy the submission only shows. I’ve spent a huge amount of time early on doing the local competitions which I believe are key for any jiu-jitsu athlete, but moving forward, for now, my focus is going to be on my students at the local competitions. And I will predominantly be focusing on IBJJF and UAE at black belt.

Kieran – So out of all the competitions you’ve participated in which has been your toughest test to date?

Mike – My biggest achievement has to be IBJJF GI Europeans so far. I took bronze at brown belt this year.

Kieran – Amazing, congratulations. What do you think is a great submission that isn’t utilised enough? Whether that be in BJJ or MMA.

Mike – Thanks, for me I’d say the straight foot lock. When applied correctly it can truly be devastating submission.

Kieran – Have you hit that particular submission many times?

Mike – Yes it’s one of my favourite submissions. I’ve worked it for many years and have developed a nastier finish.

Kieran – I would not like to be on the receiving end of that. I recently spoke with Darren Ferguson and he said he likes to implement berimbolo into his game. Is there any kind of style of BJJ that you like to use in your game?

Mike – I’ve always been a guard player but over the last few years I’ve been working a lot more top pressure.

Kieran – Trying to improve every aspect of your game and be the best you can be? So we know you are a fierce competitor and have competed in a lot of competitions, but can you tell us who your professor is and what BJJ practitioners become your inspiration?

Mike – Yes absolutely I’m always looking to improve in every area. There is always room for improvement. My coach is Paul Hartley from Leao Marinho BJJ. With regards to BJJ athletes that have inspired me, I’ve always said I’d love to compete against Caio Terra, the likes of the Miyaos have amazing jiu-jitsu. There are so many top BJJ athletes I’m looking forward to seeing myself in the same bracket at some competitions in the near future. 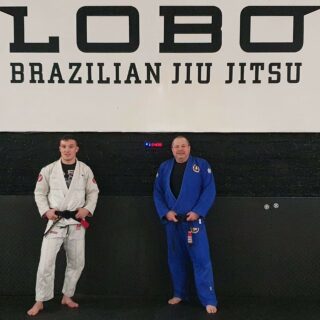 Kieran – Brilliant mate. Last question, in regards to your future then, what would you like to achieve in the next five years?

Mike – My main focus is to continue to grow and develop my team. With regards to myself, I will be focusing on large tournaments around the world. Worlds, Pans, Euros etc.

Kieran – Well, I look forward to seeing you achieve those things. I appreciate you taking the time to chat with me. Thanks, mate.