by Peter Knox
in Brave CF
0

Tajikistan might not be a household name for MMA lovers just yet, but the country is producing some of the biggest stars of tomorrow and has a pathway to success with their IMMAF ties and investment in grassroots programs. One of the fighters that have benefitted from this approach is set for the biggest bout of his career. Tajikistan’s own Jahongir Saidjamolov will take on Kyrgyz superstar Abdisalam Kubanychbek in the main card of BRAVE CF 46, set for January 16th. 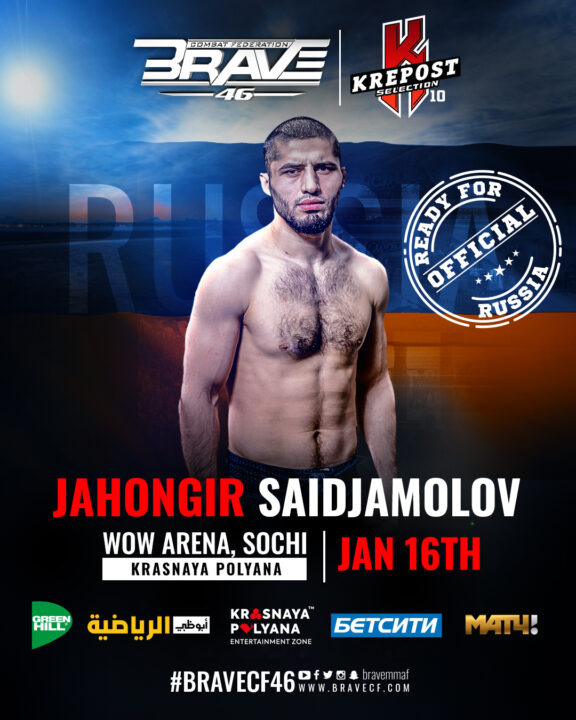 Saidjamolov will become the second fighter from his country to feature for BRAVE CF, after Umed Urfonov. Jahongir has made a name for himself in various promotions, garnering 14 wins in his professional mixed martial arts career with 10 knockouts, half of which were in the first round.  With the weight of the Tajikistani martial arts community on his back, and a Kyrgyzstani fighter standing between him and a BRAVE CF debut win, Saidjamolov is determined to have his hands raised.

For the Tajikistani Warrior, a victory over Kubanychbek, one of the top Lightweights in the world and in the BRAVE CF roster, could very well mean a fast-track to a world title shot.

‘’I’m feeling very good, my weight cut is on schedule, and I’m training with very tough guys. BRAVE CF is a great promotion, and I want to win so I can keep on the road to the title’’, said Saidjamolov.

Known for his aggressive finishes, Jahongir is riding a six-fight win streak into his debut with the fastest-growing MMA organization, a feat that caught the eye of BRAVE CF, who’s expanding into new markets and will make its Russia debut with BRAVE CF 46.

The first-ever show in Russian territory will take place in association with Krepost Selection, in Sochi, Russia. BRAVE CF 46 will be headlined by a Super Lightweight world title fight, as reigning champion Eldar Eldarov defends his crown for the first time against Leonardo Mafra. Ali Bagautinov, Roman Bogatov, Konstantin Erokhin, amongst others, are also expected to feature.