2020 may have been the year of confinement and isolation for the masses, but for French MMA it proved an annum of liberation. January saw the sport’s legalisation, with the French Sports Ministry handing over the reins to the nation’s boxing federation, tasking them to kickstart the first phase of development and establish a new national MMA federation of its own.

Whilst MMA in France seeks to find its footing, it hasn’t taken them long to unearth a poster boy to lead the charge in making MMA a mainstay. Newly crowned Cage Warriors Featherweight King and Fighter of the Year for 2020, Morgan ‘The Last Pirate’ Charrière [16-7-1], has assumed popularity in his home nation which has drawn comparison to the early years of Dublin bad boy, Conor McGregor.

Yet, while the savage striking French firecracker is still to receive the same TV/media exposure a fighter might expect from signing with the likes of the UFC/Bellator, monster Morgan has racked up an eyebrow arching 140k+ followers on both Twitter and Instagram.

Having seen off England’s Peter ‘The Predator’ Goodwin [10-7-0] in the final bout of Cage Warrior’s December trilogy, the French recruit has undoubtedly scaled the summit of what the European scene has to offer. And, with a new challenge beckoning against Northamptonshire’s Jordan ‘The Epidemic’ Vucenic [7-1-0] at Saturday’s Cage Warriors Trilogy event on 20th March, MMA UK has decided to delve deeper into the making of France’s MMA superstar.

A lifelong martial artist, the mild-mannered Frenchman got his combative start in Judoka at the age of 8 before transitioning to MMA as a 17 year old in 2012. Within just two years he was fighting professionally, triumphing in his first opening two scraps before conceding three on the bounce!

Fighting out of Team Chapa Quente, in Mantes-la-Jolie (a commune just west of Paris), the French technician’s skills are befitting someone of his celebrity. Well versed in stategic counterpunching, and with cannon balls in each hand, the lethal ‘Last Pirate’ has already registered eight knockouts from his 16 pro wins.

His big media breakout came when he linked up with Twitch superstar and fellow Frenchman, Kameto who, at the time of this article, himself boasts 693k followers on the video game streaming website Twitch. Together the pair collaborated on a web series titled ‘Plus Jamais Gros’ which translates to ‘Never Fat Again’, which followed the grappling Gauls on their fitness journey and contrasting goals; Charrière in his conquest for championship glory and Kameto, the 330-pound video gaming hermit, in his pursuit of the salad bar. After nestling into the streamer’s Marseille home for a month, Kameto’s shifted a sizeable 55 pounds with the pirate captain cracking the lash.

Speaking to BJPenn.com, the ‘Last Pirate’ acknowledged the immediate benefits that the web series played in expanding his fan base:

“Before I knew, boom! An army was made. I started doing more YouTube videos on my own channel and more content on my social media in order to help people to be a better version of themselves, motivating them. So we are in a win-win situation: I help them and they help me.”

The 145lb champ’s popularity subsequently erupted, his feel-good message and positive persona drawing French eyes to the MMA scene like no other before him. Following on from the momentum of the webseries and the 25-year-olds initial media drive, he has now invested heavily in his online presence. In addition to refining his own Youtube brand, he delivers a daily 6 pm online workout promoting positivity and inspiring the multitudes imprisoned at home during the pandemic. Furthermore, he fronts a range of DVD tutorials and online fitness programmes, including MMA striking clinics for his disciples to replicate from the comfort of their front rooms.

The name ‘The Last Pirate’ derives from the popular anime show One Piece, which follows a cursed, rubberised pirate named ‘Luffy’ on his quest to become king of the pirates by tracking down the ultimate One Piece treasure. Much like Luffy, Charrière’s spotty early career forced him to forage in foreign fields in pursuit of pieces of silver.

In addition to the octogans of homeland France,  the nomadic privateer ventured into Luxembourg, Belgium, Ukraine, even mainland China, – always accompanied by his trademark skull mask and black safari hat – as he served a stellar fighting apprenticeship. Now, with MMA belatedly legalised in the land of his birth, choker Charriere – four submission wins on his CV – believes the tide has turned:

“We, the French fighters, are so used to always travelling and fighting the toughest local guys, that we don’t really know what it’s like to be fighting at home. I want to experience that, I want to hear the crowd rooting only for me. And you can expect all of my fans to come to the show so you can imagine the atmosphere.”

Contrary to the Twitter trolls who’d mouth off your mother, Charrière’s online popularity has created a sizeable crew of crazy cutthroats who accommodate him each time he enters the cage.

This was perhaps most exemplified by Charrière’s Cage Warriors 109 win over Dean Trueman [10-6-0], where his army’s deafening chants of “Dean, you suck!” drowned out Birmingham’s Resorts World Arena.

After a sluggish start, the media sensation rallied to finish the fight emphatically in the third round. Having clipping Trueman with an violent overhand right, clinical Charriere darted in with a frenetic flurry and a perfectly executed knee to the temple, prompting referee Mark Goddard’s compassionate intervention, with Trueman counting birdies. That obliteration earned many accolades, including Cage Warriors’ 2019 KO of the Year plus special praise from SBG Ireland’s head coach John Kavanagh, a facility where Charrière once trained.

Since signing for Cage Warriors in 2019, it hasn’t always been smooth sailing for ‘Luffy’. In his CW debut against Søren Bak [14-1-0], the then 24 year old lost a much debated majority decision for the interim featherweight title at Cage Warriors 103. However, failure to make the championship weight meant he’d have been ineligible for the treasure even if he’d triumphed.

Regardless of outcome, Charrière certainly showed his mustard, with ‘conqueror’ Bak describing Morgan as “the toughest son of a bitch” that the 5’9” Dane had ever encountered. Charrière clearly bettered ‘The True Viking’ in the closing round of the fight, with a sustained onslaught of jabs and right hands proved too much for the Danish opponent. Alas, too little, too late; the Nordic’s signatory toughness allowed him to carve out a razor thin decision.

So what next for the leader of the French MMA revolution? With the sport newly legalised in la République, the leading MMA outlets will be crying out for a French speaking figurehead to help penetrate the newly liberated markets. And who better to explore these unmarked lands than their very own sea dog? Now, with a newly crowned Cage Warriors champ of their own, there’s no knowing how far the Instagram sensation’s popularity can be felt both within France and the rest of the French-speaking world. He’s surely a cinch for any of the major MMA organisations.

In a September 2020 interview with The Bash’s Peter Carroll, the supremely conditioned 5ft ’7in ace dismissed the recent  Bellator Paris card as ‘not a big deal’, expressing disinterest in the event due to its restricted 5000 capacity, despite this being widely recognised as the first-ever major MMA event taking place on French soil. With his current level of celebrity, it’s conceivable that the youthful prospect could be selling out sizeable arenas of his own in the years ahead.

But the single-minded Charrière certainly won’t be looking  beyond his March’s showdown with the 24-year-old Vucenic, who exhibited real grit in his narrow split decision victory over fellow prospect Paul Hughes. Yet, if KO king Charrière forces his opponent to walk the plank come 20th March,  and if the wind continues to blow favourably upon French sails the way they are, there’s no limit to the levels to which this superstar can scale, both as a fighter and as a star. Following the alleviation of the ban on MMA in France, the UFC released a statement expressing their desire to bring their first-ever event to the capital. No doubt, Charrière would be in hot contention to showcase should the occasion arise.

Regardless, with the full weight of a proud fighting nation behind him, expecting the swaggering pirate pioneer to prove an irrepressible force on whatever shore he chooses to plunder. 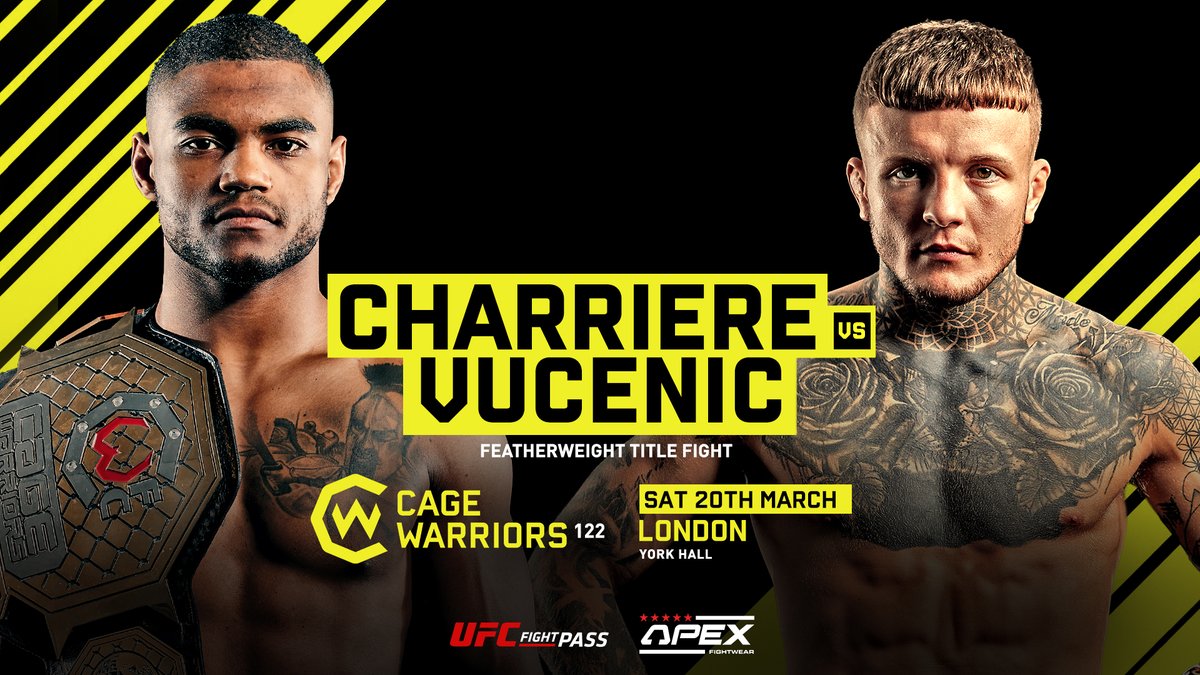