Patrick Rowan is a Brazilian Jiu-Jitsu Blue belt based in Dundee who has been on top form by winning medals at various tournaments at different belts around the country. Patrick’s biggest achievements to date have been at the British Gi and No-gi tournaments along with appearances at the Scottish Grappling Invitational events. I hope you enjoy this interview.

(Patrick on the podium at the Rickson Cup in Glasgow)

Majid: Hi Folks this is Majid here on the UK BJJ Show and I am joined by BJJ Blue belt and regular competitor Patrick Rowan. Patrick, how are you this afternoon?

Majid: I am good barely remaining sane in these uncertain times. Have you been doing alternative training during our beloved COVID-19 enabled restrictions?

Patrick: I followed the rules for about 3 weeks, but then after looking into the actual statistics I decided to start training. Which is absolutely essential for me to keep my sanity, at the start, it was great because we could train outside in the good weather, but it’s becoming much more challenging now. But thankfully me & a few pals have found a way to train some MMA/BJJ. I would be in a really bad place right now if I couldn’t train.

Majid: I totally agree with you. I honestly believe there has been major oversight demonstrated by our all-knowing leaders. When was the first time you encountered BJJ/Submission grappling? Was it on TV or in a gym?

Patrick: So I’ve always been a fan of MMA, but the first time I experienced any kind of Jiu-Jitsu was at a house party in 2017, my pal who was in the Marines had done some grappling there, challenged me to a submission match in the living room. I was big into lifting weights at the time so I expected to beat him easy. He ended up getting me in an RNC in seconds, then we rematched & he guillotined me even quicker. It was really embarrassing because there were about 30 people watching me get destroyed.

It crushed my ego so badly that at that moment I knew I had to learn some skills. I then started training in late 2017 after speaking to a couple of friends that had been training at Dundee MMA. 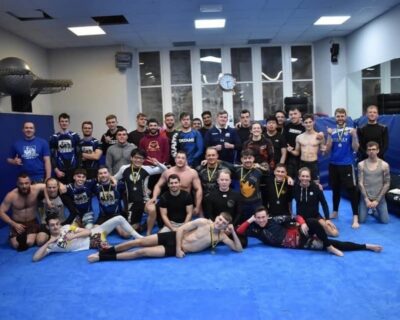 Majid: Yeah I love the Dundee MMA guys. Me and big Craig are fellow Iron Maiden fans. That is an MMA and competition focused gym so did that inspire you to eventually compete?

Patrick: Yeah Craig is a legend, a lot of experienced guys there. Competing never crossed my mind until summer 2018, mainly because I didn’t even know we had local comps, & because every time I trained, it was basically a competition in my eyes haha, every roll was a fight to the death. No technique just sheer strength & white belt spazzing.

Majid: Lol oh that happens to us all in the gym. You are known to be a big competitor in BJJ. For the readers’ knowledge can you please list your competition achievements?

Patrick: I’m extremely competitive haha, maybe a bit too much. I’ll try to list them off. So from roughly 18 months worth of competing:

Can’t remember all the rest, my memory is terrible haha, but it adds up to – 26 golds, 6 silvers & 6 silvers from white to blue belt.

(Patrick on the podium at a BJJ 247 competition)

But in my mind the small accomplishments don’t mean anything, only care about winning IBJJF European & World championships now. & the buzz/memories from competing.

Majid: That is a very impressive list. What has been your favourite moment on the competition mats up to now?

Patrick: It’s either the first time I won gold at white belt, in the 2018 Scottish Cup. Had lost all 3 comps previously & really didn’t believe I was capable to ever win a tournament, so that was a real confidence booster & from there I went on a pretty good run. The next biggest one was definitely winning the 2019 British open, I had an insanely tough division & really had to dig deep to win.

(Patrick on the podium at another BJJ 247 event)

Majid: Yeah I remember the videos that your wingman Darren put up. I believe he won Gold as well and you were training at Gracie Barra Fife at that time. What is your current team, Patrick? 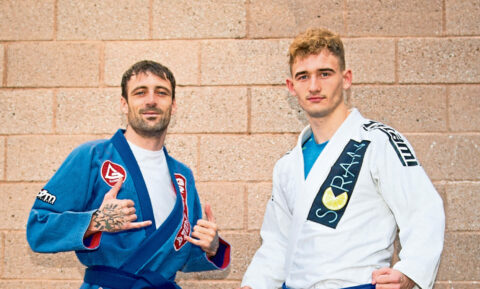 Patrick: The main place I train is Dundee MMA, but I’m a big believer in cross-training. It’s a big advantage to make friends from all over & meet up to roll/share techniques. Especially in a small country like Scotland, I think it helps raise everyone’s level

Majid: I totally agree. I was training at Checkmat Edinburgh and the Griphouse before aunty Rona reared her ugly head. Do you prefer face to face teaching or online teaching or both in terms of BJJ?

Patrick: So to be honest, from the time I started BJJ to the start of lockdown, I absolutely hated drilling or drilling techniques. I would skip warm-ups & technique so I could only do the rolling. Turns out I’ve had lifelong attention deficit disorder, which makes total sense why I’ve been a terrible student haha. Thankfully I’ve got the help I’ve needed, to now where I’ve actually got an attention span. So in the last few months I’ve been spending hours each day watching technique videos & instructionals. Before I won competitions with pure athleticism, whereas now I’ll have the technique to back to up, & will actually be able to focus for the full classes

Majid: That is awesome to hear. At Checkmat Edinburgh, we have a complete geek in terms of online BJJ and that is the Mole eyed Jamie Harvey your former nemesis at a previous competition. Which MMA or BJJ athlete do you model your game on?

Patrick: Hahaha brilliant. I know Jamie is a big fan of John Danaher, that’s why I was so nervous to compete against him in case he tore my knees apart. In terms of BJJ, I’m 6 foot 2.5 which I think is the same height as guys like Gordan Ryan & Keenan Cornelius, I would say I have similar physical attributes as well with strength & flexibility, so I’ve been watching a fair bit of their techniques. But my biggest inspirations from a mental aspect are MMA fighters like Tony Ferguson. He quite possibly has the most heart ever & trains like a mad man.

Majid: It’s interesting that you mention Keenan’s name because your physical attributes compliment that kind of game. Who has been your most prominent opponent in the gym and on the competition mats?

Patrick: One of my favourite guys to roll with is Frazer Hirsch, I consider him a teammate & a rival competitor at the same time (although I think he’ll be 2 weight classes heavier now). He’s insanely strong, good wrestling from his MMA training & absolutely solid, so whenever we roll it is full-on war every time.

Majid: He looks like an absolute monster whenever I see him compete. I remember seeing him throwing my teammate Craig Sieber about like he was a big bag of rubbish at the Checkmat Edinburgh Open. Patrick, what are your short term and long term goals moving forward?

Patrick: Frazer absolutely wrecks people, so being able to train with him is great fun. Hmm, my short term goal is to win every major tournament, in terms of IBJJF European & worlds gi & no-gi. Long term I think it would be cool to own my own gym, not really because I want to be a coach, more so in case there’s a bad flu season & a certain someone decides to go full dictator again. Having the option to train illegally would be great.

Majid: Yeah I love the idea of a personal gym to negate impact from possible dictators. Do you want to send out a message to the readers before wrapping up the interview?

Patrick: If you’ve read this far then thank you. The message I would like to give is that we only live one life. It should be on our own terms, our own risk & do whatever makes you happy. Don’t listen to negativity. Be a free thinker & don’t let your others perception hold you back. Peace✌️

Majid: That is an awesome message. I on behalf of myself and the UK BJJ show want to thank you for taking time out to participate in this interview. I wish you the best of luck in your future endeavours.

Patrick: Thank you Maj and the guys at MMA UK for the chat, always appreciate guys like you and Stoomboy. Hopefully, see you soon at future comps👊