Muhammed Nasir Khan Yousafzai is the head coach of the successful KAKS MMA in Pakistan. He is also the mastermind behind the very well received Floggers Series MMA and Grappling events. Recently Nasir played a vital role in the fight camp for One FC fighter Ahmed Mujtaba for an upcoming fight against an Indian based fighter which resulted in Ahmed brutally knocking out his opponent in the first round. I hope you enjoy the interview. 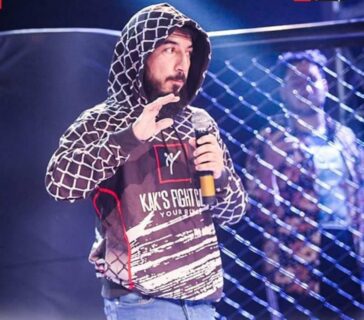 (Nasir making an announcement during a Floggers Series event in Pakistan)

Majid: Hi folks this is Majid here on the MMA UK BJJ show. I am joined by the owner of the very successful Flogger Series Shows and KAKs MMA club in Pakistan, Muhammad Nasir Khan. Muhammad, how are you this evening?

Muhammad: I am fine thank you. What about you boss?

I am good thank you. How have things been during the pandemic?

Majid: Yes everything is as usual as planned. Has the pandemic not affected you in any way?

Majid: That is fantastic. So you have kept the MMA and BJJ competition game alive during the last year. Can you tell the readers about where you have originated from? For example, where you were born and raised.

Muhammad: My birthplace is Mardan. Then at the age of 5, I came to Rawalpindi and since then I am raised here. All my education and everything. 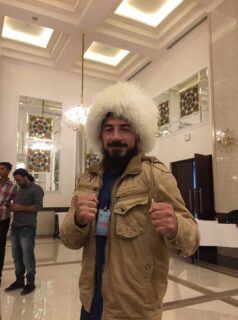 (Nasir at a One FC event in Malaysia)

Majid: Wow that is over 20 years in Rawalpindi. What is the inspiration behind the names of KAKs MMA and Flogger Series?

Kashif Ali Khan. He was my teacher. He died in a road accident in 2008. So that’s why I named my gym KAK’S Fight Club. I once came to know that somewhere in Army (I didn’t remember the country name) there is a Post called Flogger and his responsibility is to Torture the prisoners. So I named my Promotion Flogger Series where I am officially allowing the fighters to torture each other.

Majid: Ahhh very interesting facts here. How and where did you initially encounter Brazilian Jiu-Jitsu? And have you ever done any other martial arts?

Muhammad: For the very first time I encountered BJJ in PGC-1. At that time I was only familiar with RNC. But I did competed and won One fight and lose in the second one. Yes, I started my career in 2007 from Taekwondo then in 2008 switched to NINJA. Then in 2010 started boxing. Then in 2011 started Wushu/Kickboxing and finally started MMA in 2012 (till now).

Majid: Oh wow that is extensive martial arts experience. When and where did you start BJJ/Submission grappling?

Muhammad: In 2012 started from YouTube. Then came to know about Synergy MMA Lahore. I started visiting Lahore every month (For two days a month i.e. Saturday and Sunday). Then you know that was very difficult for me to go to Lahore so I then quit that program and once again switched towards YouTube

Majid: Wow that is incredible. Who currently teaches grappling at your gym?

Muhammad: In August 2020 Ahmed Mujtaba joined us as a BJJ coach. So he is now teaching BJJ 3 days a week at KAK’S Fight Club. 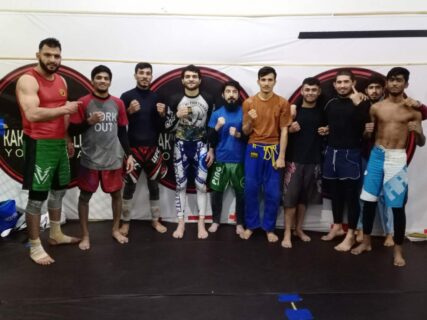 (The KAKS team with One FC MMA fighter Ahmed Mujtaba)

Majid: That is awesome news. For the readers’ information, Ahmed Mujtaba fights on the world-renowned One Fighting Championship promotion. Do you train BJJ regularly yourself and who do you model your game on?

Muhammad: I don’t train BJJ myself on regular basis. But regarding my role model in BJJ, I love Professor Yousaf Nabi.

Majid: Oh, he is my head coach that is awesome to hear. What has encouraged you to compete in MMA and grappling competitions yourself?

Muhammad: That’s great. You are very lucky. I always wanted to be a freestyle fighter since my childhood. Before starting my Martial Arts journey I was a very bad guy…. every time fighting with my Classmates with my neighbours…you know I mean I was a kind of gangster. But then all of the sudden Sir Kashif Ali Khan changed my Life and Mind.

Majid: It’s great to have a role model like that in your life. What encouraged you to start the Flogger Series?

Muhammad: Fighting Alliance organized there last event in 2016 (I think so). After that, no one stepped in to organize events to provide opportunities for our upcoming MMA talent. So, I stepped in and decided to start an MMA event. At that time we don’t have a cage so we got a sponsor who sponsored us 5000$ in 2018 and that was a kick start for Flogger Series.

Majid: Fantastic. What motivated you to start KAKs MMA?

Muhammad: For my Teacher Sir Kashif Ali Khan, I wanted to be with this TAG at the Highest stages of MMA.

Majid: This is a very noble mindset to have by creating a club under the memory of your late coach. How do you keep yourself updated on MMA training knowledge?

Muhammad: Thanks. I never miss UFC, ONE Championship and Bellator event. I prefer watching fights instead of Tutorials.

Majid: So, you are a visual learner which is funny as I struggle to learn things solely through visual means. Which fighter do you model the MMA style that you teach in the gym?

Muhammad: I am a very big fan of Anderson Silva. He is the one from whom I am inspired by MMA. I started watching his fights and then decided to quit Wushu and started training MMA.

Majid: Yeah I loved Anderson Silva at his peak. Do you have any future ambitions to compete in either MMA or grappling competitions in the future?

Muhammad: Right now I am 30 years old. I didn’t yet achieve anything in MMA as a fighter. But still, I am eagerly waiting for that moment to be in the octagon as a fighter.

Majid: You are still young so keep on pushing my friend. Are there any major prospects from KAKs that you want to tell the readers about?

Muhammad: Yes I will. And yes Ismail “The Volcano” Khan and Babar “The Flogger” Ali. These two guys will be at the top MMA stages soon In Sha Allah. 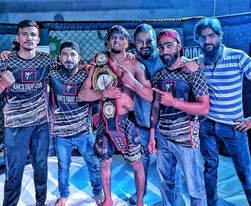 (Nasir with Ismail “The Volcano” Khan after an MMA victory)

Majid: Yeh I have watched them fight they are absolute fire. What are your long term and short term plans for the future?

Muhammad: For these two guys?

Majid: For yourselves as well as the guys

Majid: I won’t be surprised if any of your guys are fighting in a major MMA promotion one day. Do you have any parting words for the readers?

Muhammad: Yes. Stop leg-pulling. Focus on your own work. If any of our country fellows achieved something, we must appreciate it instead of criticising it.

Majid: Very positive advice to give.  I want to thank you on behalf of the UK BJJ Show for taking time out to participate in this interview and I wish you the best of luck in your future endeavours.

Muhammad: Thank you for contacting me.