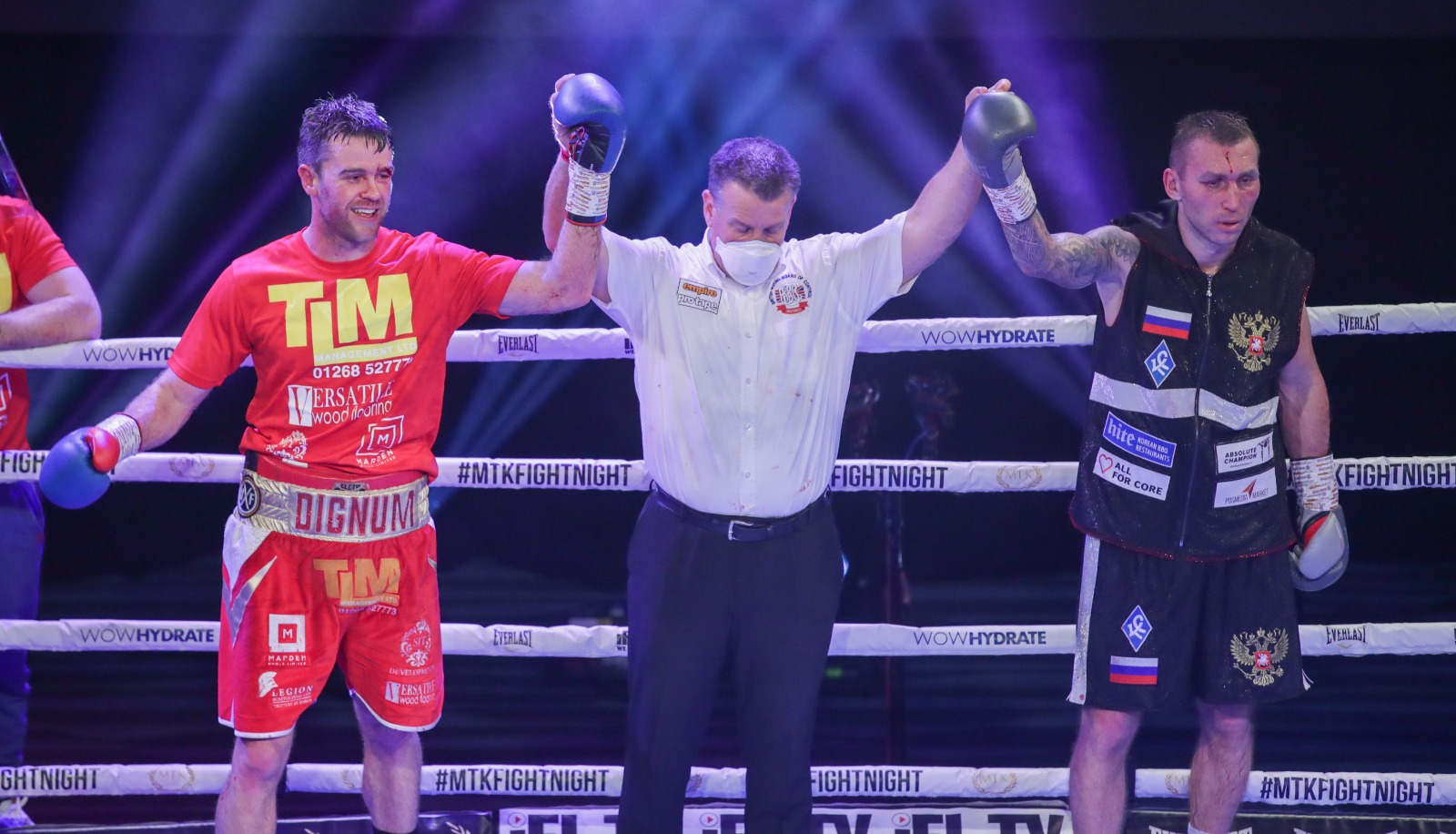 The event was taking place at the University of Bolton Stadium and broadcast live on IFL TV, with fans treated to yet another action-packed event.

Both Dignum and Sirotkin gave it their absolute all, but they couldn’t be split after 30 minutes of action, with the judges scoring it a split draw.

Danny Dignum kept hold of his unbeaten record and retained his WBO European middleweight title as he drew with Andrey Sirotkin.

Every round was extremely competitive, with Dignum (13-0-1, 7 KOs) and Sirotkin (19-1-1, 7 KOs) each having success and giving their absolute all throughout all 10 rounds.

It looked like the fight could be anybody’s as the bell tolled to signal the end of the fight, and that proved to be the case, with the judges scoring it 96-95 Dignum, 96-94 Sirotkin, and 95-95, making it a split draw.

Dignum said: “He was very tricky. I thought I nicked the fight and I felt fit in there and felt good. He was an awkward customer, but I thought that I did enough to win it.

“It is what it is, that’s boxing. Fair play to Sirotkin, he came over and put up a good fight. I’m not bitter, I thought I won but a draw is a draw. I’ll be back fitter and stronger and it’s all part of the experience.

“I don’t feel like a loser, I’ve just got to go back and learn. I got a bad cut and I couldn’t see out of my left eye, but I’ll recover and get back in the gym. I probably learned more in that fight than all of my others.”

Dan Azeez retained his English light-heavyweight title as he earned a split decision win over Ricky Summers after 10 fantastic rounds of action.

It was a brilliant fight from start to finish, with both men landing with huge shots at stages during the fight, but Azeez appeared to be getting the better of the action.

It looked as if Azeez (13-0, 8 KOs) was close to getting the stoppage in the closing stages, but Summers (17-3-1, 6 KOs) was able to hold on and last the duration. In the end the judges had it closer than many others who had Azeez winning comfortably, with the defending champion getting the nod via split decision.

Azeez said: “I think my hunger was the difference. Ricky was a good operator and was tough. I hit him with some good shots and he gritted his team and called me on.

“That is a fight that I need. I am calling out all these guys at the top, and that fight with Ricky is the kind that I need to let me know who is up there in my division. I’ve had the learning fights and I’m ready to step it up now.

“Hopefully MTK Global can push me in the right direction. I’m a champion and a fighter, it’s in my blood, and I want to be in the mix at the top.”

Jack Bateson extended his unbeaten record to 13-0 as he came out on top in a brilliant super-bantamweight battle against Joe Ham.

The fight served as the toughest test of Bateson’s (13-0, 3 KOs) career so far, going up against former Scottish champion Ham (16-3, 6 KOs), and it was a clash that was fought at a very fast pace.

Both men had success during portions of the fight, but it was Bateson who was edging the majority of the rounds, and the referee saw it the same way as he handed the Leeds fighter a well-earned 78-75 points win against a very game Ham.

Bateson said: “Joe is a great lad and a good friend of mine, but it is boxing at the end of the day and we had a good fight with each other.

“I started as a southpaw and probably was for the majority of the fight, and I think that threw him. Those little things worked and helped me get the win. I was the best I ever felt on the scales and I was a different animal today once I fuelled up.

“I learned a lot in that fight, and in the next one I’ll make sure I make even less mistakes. Anybody who knows me knows what I put into this sport, and hopefully it will pay off for me in the end.”

LEWIE EDMONDSON def. LUKE BLACKLEDGE via RTD at 3:00 of round 3

Rising star Lewie Edmondson picked up yet another big win as he claimed a stoppage victory over former Commonwealth super-middleweight champion Luke Blackledge.

Edmondson (5-0, 2 KOs) was coming off the back of a superb stoppage victory over John Telford in December, and he picked up right where he left off, using his switch-hitting to perfection and landing at will over Blackledge (26-10-2, 9 KOs).

The punishment became too much at the end of round three, with Blackledge’s corner deciding to pull him out, giving Edmondson another stylish win.

Edmondson said: “I really enjoyed it in there. I could see after a couple of rounds that I was starting to get to him. I stepped on it and then he retired after three rounds, so I’m very happy.

“I was switch-hitting in there but I don’t think about it too much, it’s pretty natural to me, so I just see what is working. I’m 5-0 now and that’s two opponents that have come to win, and you don’t see that often.

“I see that Charlie Schofield and Mickey Ellison are meant to be fighting for the English title in June, and I want the winner of that. I want to be fast-tracked. Billy Joe Saunders and MTK Global don’t want me to be held back, they want me to make statements.”

CARL FAIL def. KRISTAPS ZULGIS via TKO at 2:55 of round 2

Carl Fail picked up his second win in the space of five weeks as he earned a dominant second round stoppage victory over Kristaps Zulgis.

Fail (2-0, 1 KO) made his professional debut last month, but wasted no time getting back in the ring, getting off to a fast start against Zulgis before dropping his opponent in round two.

Zulgis was able to get back to his feet, but another knockdown came later in the round which Zulgis couldn’t recover from, handing Fail a fantastic stoppage win.

Fail said: “Five weeks ago I had my debut and then I had the chance to jump in and take this fight, and it feels great to get the victory. I learnt so much from my debut and I took that experience into my second fight and it showed.

“I’m learning in the gym all the time. There are still bits I need to work on, but we’ll keep developing and getting better and better. I watched my brother’s professional debut and got a lot of experience from that too.

“We’re a tight team, and having them here with me is great. I’m ready to grab any opportunity that comes my way, so I hope to be out again soon.”

Dublin’s Paul Ryan got his professional career off to a winning start, as he picked up a four rounds points win over Kyle Hughes.

Ryan (1-0) got off to a good start in the bout, but Hughes (2-3) came back strong to ensure it wouldn’t be all plain-sailing for the debutant.

Despite the fightback from Hughes, Ryan was able to maintain his composure and display some great boxing skills, and in the end was able to get the ball rolling in the paid ranks with a hard-fought 39-38 points win after four competitive rounds.

Ryan said: “It wasn’t my best performance but I did what I had to do. I’ve waited a long time for my debut but it’s bigger and better from here.

“I got back into the amateur habits a bit by going onto the back foot, and in the professional game you can’t do that. It’s something to learn from and we’ll move forward.

“It’s all been an experience compared to what it was like in the amateurs. I would like to be out five times this year if possible as we’re picking up for lost time.”

Paul McCullagh made it back to back win in the paid ranks as he picked up a one-sided four rounds points win against Antony Woolery.

McCullagh (2-0, 1 KO) dictated proceedings from the first bell to the last, with Woolery (2-4) unable to deal with the man known as ‘The Irish Drago.’

While McCullagh was dominating the action, Woolery did manage to go the distance, with the referee scoring it 40-36 to McCullagh to come away with a brilliant win.