Can the nicest fighter in the organisation finally get that Welterweight gold?

by Dave Peacock
in UFC
0

Stephen “Wonderboy” Thompson is the nicest guy in MMA. There I said it. I’m not the only one to say it and I will most certainly not be the last either. But does the current NMF belt holder (awarded by Ariel Helwani) have what it takes to add the UFC welterweight championship to his impressive record…

Wonderboy embodies the respect that his chosen martial art of Karate teaches and under the tutelage of his Father Ray and with the assistance of his two brothers at their Upstate Karate Gym in South Carolina he became a fabled kickboxing Wunderkind who managed to tally 52-0 as and professional full-contact kickboxer before he got the UFC to call up. Widely regarded as one of the greatest strikers to ever grace the Octagon, his resume speaks for itself with notable wins over perennial contenders over the years such as Rory McDonald and next in line for the welterweight strap – Jorge Masvidal as well as being somewhat of a gatekeeper to the top 5 in the division with only the very best being able to break past him into the top 5 ranked welterweights in the world.  With his likeable manner and happy disposition, you would find it tough to be intimidated by the kickboxing veteran but don’t let his nice guy persona fool you 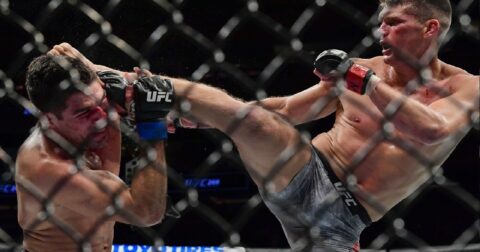 At UFC 264 Wonderboy lines up against the former BJJ world champion and most recent victim of Kamaru Usman’s suffocating grappling, Gilbert Burns. Stylistically this will be a tough fight for the Kempo Karate black belt, but he has proven his defensive grappling skill in his previous bouts and although the grappling quality isn’t on the same level as a  former BJJ world champion in Burns, Thompson holds a brown belt under his brother-in-law Carlos Machado so he is no slouch in terms of grappling. His best bet, as every bout, is to keep it standing where the wily veteran can piece up Gilbert Burns with his repertoire of snappy kicks and unusual movement.

There is a case to make for Thompson to jump up to face Usman next but in my opinion, this is the correct fight to make for Wonderboy at this stage in his career. He’s 38 and granted he is incredibly fit but you get the sense that his days of being in the top 5 and within title contention are becoming numbered; he surely only has one or max two titles runs left before retirement and we’ve already seen a very notable Welterweight be overtaken by their younger counterparts in former champ Tyron Woodley however, there is something about Wonderboy that gives the impression he can still cut it with the killers in the top 5. Experience is massive in the fight game and not many people in MMA history have as much as he does so this will either be the end of Wonderboy as a contender or he has a chance to go out at the pinnacle and be remembered as one of the greatest MMA technicians ever.

Casting your eye forward a year or two and IF Masvidal does overcome Usman in April (In my opinion we’re looking at another 50-45 for Usman) then I can see Thompson repeating what he did before and maybe getting a finish against the Cuban-American but if it is Kamaru who outclasses Jorge then we can expect Usman’s reign to continue past Wonderboy. It’s bittersweet for any fan of Wonderboy as he is the epitome of what you want from a professional fighter but with Usman being so damn good at smothering his opposition and not allowing time to throw any sort of strike it can and will only go one way. I can’t deny that I respect Stephen Thompson and would love to see gold around his waist before his retirement and maybe the stars will align to see him reach that goal but with the standard of the opponent in his way, this is very unlikely if not impossible. However, he will always maintain the NMF belt and coupled with his exceptional collective kickboxing and UFC records he will be in the Hall of Fame when he does leave his gloves in the octagon.

Not a bad legacy to leave behind.