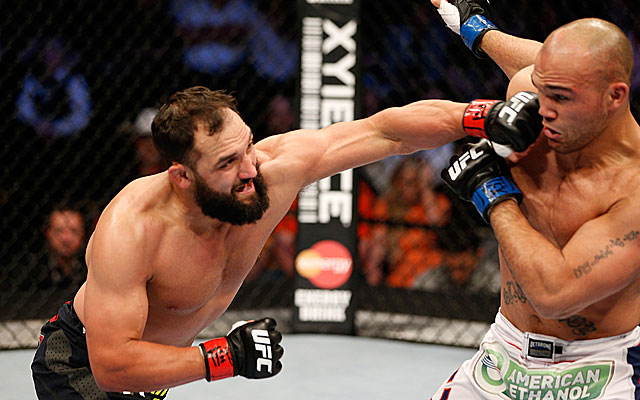 It was ten UFC events ago exactly.

Back at UFC 171, Johnny Hendricks and Robbie Lawler went to war for the UFC Welterweight title after longtime champ Georges St. Pierre vacated the throne. Hendricks, in the eyes of many, had bested GSP shortly before this, and those same people expected Hendricks to walk in and claim the belt for his own. There seemed to be an inevitability to the entire ordeal, and finally Hendricks was poised to claim the crown.

In walked Robbie Lawler version 2.0. Since rejoining the UFC, Lawler has been an absolute machine. He has become one of the most elite fighters not just in his division, but in the UFC as a whole. He stands out on the roster in so many ways, especially when it comes to fan favorites. The fight he brought to Hendricks that night over the Welterweight crown ended in much the same fashion as GSP Vs Hendricks did. A solid portion of fans felt Lawler should have been champ.

Now here we are ten cards and several months later on the dawn of this colossal rematch. There are a plethora of MMA fans eager for this weekends main event, but even still, there has been an underground murmer of nonexcitement. Perhaps feelings on immediate rematches or liking one fighter over the other, who knows the specifics. Maybe some bad blood over how the first match ended. Who knows, but I have seen several forums of fans not so interested in this rematch.

That is a huge mistake. Every fan should be stoked for Hendricks Vs Lawler II.

Think about this fact; the first fight ranks #1 on significant strikes in a title fight. Hell, they landed 348 strikes between them, and 308 of those were “Significant Strikes,” as the UFC calls them. What that means is that these were real deal shots. Plus, this stat is “landed”, not “thrown.” These two guys put every ounce on the line, and it shows even on paper, and especially on the screen. Anyone who took part in Hendricks and Lawlers first encounter will tell you it was about as back-and-forth as a five round war can get.

What made me write this edition of “MMAzing Mondays” is not necessarily that statistic and record, but what that implies when combined with the rematch. Both fighters have fought one another before, and no doubt have broken down the fight footage to the second. Each will come in feeling they have the answer, and all of this points to a fight that will not see the cards this time around. Of course, add in the record I mentioned before, and what begins to emerge is the potential for this fight to garner one of the most epic wars we have seen in quite some time. Someone will be crowned king at 170 on Saturday night, and this time there will be no questions as to who the champion is.

Get ready, UFC 181 is on it’s way. Come back all week as we begin our full in-depth statistical breakdowns of the bouts, and much more.