Welcome fight fans to the 32nd edition of “Statistically Speaking,” an article where we break down some of our favorite upcoming battles by the numbers. We dig down into all the stats, records, and achievements to see what they can shine on the fight nights that electrify time and again.

Each contains three segments; The Wrap Sheet looks at each fighter individually, the Cross Examination compares the numbers, and The Winning Path takes all this and lays forth a possible road to victory.

Today we chop up #3 ranked heavyweight Travis Browne Vs the hard hitting Brendan Shaub going down this weekend at UFC 181. With the interim title in Werdum’s hands, and Velasquez healing up for a showdown, many believe Travis Browne could secure the #1 contender spot with a victory Staurday night.

Join us all week as we touch on all the great bouts coming to us from UFC 181, topped with an exciting rematch between Welterweight champ Johnny Hendricks and #1 contender Robbie Lawler. CLICK HERE if you missed yesterdays breakdown of Duffee Vs Hamilton!

Lets kick things off with Brendan “Big Brown”Shaub. Last seen taking a loss to the recently returned Andrei Arlovski back at UFC 174, Shaub is in a prime position. Despite the split decision loss, here he is fighting the #3 ranked guy in his division. At 10-4-0, with seven wins via KO, Shaub is a tough challenge for anybody. As with many in the heavyweight division, the majority of his losses come from strikes, but he himself is one hell of a power puncher. He secured his first submission victory a few fights ago, marking a certain growing improvement in his ground game.

A closer look at Brendans numbers reveals that while he does have stunning wins, he is a very average fighter on paper. His output, accuracy, and striking defense are nothing to point out, the highest stat on the feet being a 59% blockingsuccess. On the mat his numbers do shine a bit more, but gain, nothing mindblowing. He does shine with his takedown defense coming in just over 80%, which can be huge in these heavyweight wars.

Travis “Hapa” Browne enters this fight at 16-2-1 and also coming off a loss in his last outing, a unanimous decision to Interim champ Fabricio Werdum. Browne has an 80in reach, stands at 6’7, and is also the heavier fighter. Although he has submitted a fighter or two, the vast majority of “Hapa’s” wins have come by way of knockout. He himself has been knocked out once, and three losses by way of the cards.

Browne is a big guy with a ton of heart and grit. Good thing, because he absorbs a high amount of strikes per round. His striking game is about average as far as the numbers go, although in the cage it is much more unique. On the mat he has a nice balance of takedown success and defense, each above 70%. Browne doesn’t go for a ton of submissions, but he is no stranger to chasing a few when they reveal themselves. 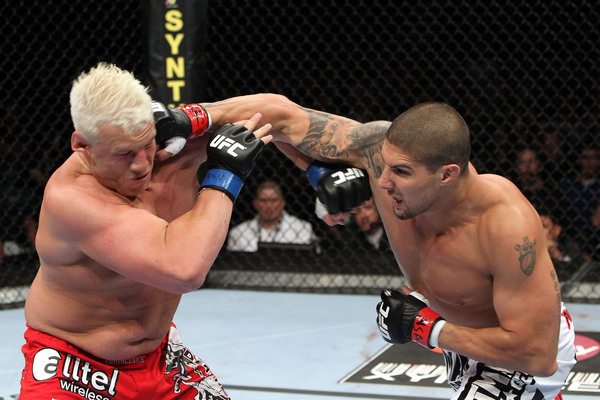 To save the best for last, let’s talk ground game first. Neither of these guys is known for going out there and putting fighters to sleep. BJJ will probably not be a huge factor in this match. With 26 wins between them, only 3 have come by way of tap. Shaub is the busier guy on the mat, and certainly more wrestling oriented. However, only about 15% of takedown attempts land on Browne on average per fight. Without the BJJ factor, once this fight hits the mat Shaub is either going to have to stay active or go full on “blanket” mode.

Now, on the feet this fight is much more interesting. They share 19 knockout wins in a total 26 victories. The chances of a KO finish this Saturday is extremely high. The numbers here are really electrifying once you mix them all together. Shaub has a very low accuracy, but a higher volume of strikes than Browne. Travis holds the superior accuracy, but his ratio of strikes landed on him per minute is slightly alarming. His stand up defene crests just barely into the low 40%.

These numbers suggest that this fight will either be an absolute barnburner or the kind of match where one fighter tries desperatly not to be wrestled by the other. Shaub will likely be able to throw more strikes, and his accuracy issues are kind of balanced out by “Hapa’s” tendancy to get hit a lot. That being said, Browne appears to be the more successful fighter overall, and probably needs fewer attacks to win this one.

Brendan Shaub has to do one of two things in this fight; float like a butterfly or break out the “lay-and-pray.” He can certainly match the pace, and has the hand speed and power to put on a hell of a striking clinic. He also holds an edge when it comes to the canvas work on Saturday night. If Brendan can be smart in the exchanges, change levels, and mix the takedowns in nicely, he stands a strong chance of grinding down Browne to the point of success. What he cannot do is get sucked into an all out war with Browne, because a testing of the chin makes things much more shakey altogether. He is a power striker, but all signs point to Browne being a little stronger.

With Travis Browne, he should be working his striking and counter wrestling. “Hapa” holds the advantage in defending takedowns, and does well getting them if he needs to. He has the size and reach advantage, and I believe the superior power and chin as well. What he cannot do is punch himself out and start getting jabbed and/or wrestled out in the last rounds. If he can keep Shaub off of him, make the space, and keep the pace, Browne’s stats show all the traits of a big KO victory at UFC 181.