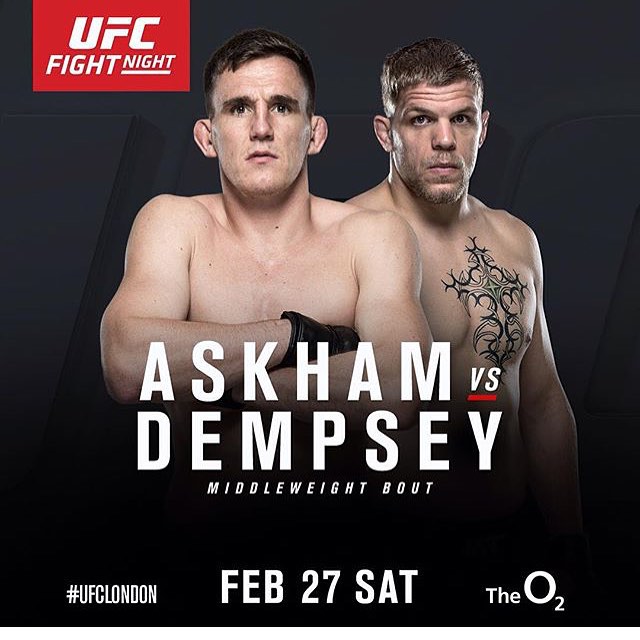 West Country fighter Scott first took up martial arts in a bid to get in shape for the Royal Marines, discovering MMA after researching into the world’s toughest sports.  Nicknamed “Bear”, Scott has been fighting in the UFC since December 2012. His record includes two wins by submission, one of which came in his most recent fight against Dylan Andrews in Adelaide, Australia in May.

His opponent, Jotko, meanwhile was inspired by UFC Hall of Famer Tito Ortiz to give up his job as a welder and begin fighting. Like Scott, Jotko is a Muay Thai specialist. He will be looking to silence the London crowd on February 27 by claiming his third consecutive win inside the Octagon®.

Yorkshireman Askham will also step out in front of home fans in London, as he goes up against American Chris Dempsey, Askham’s love of MMA began after watching a close friend compete in his hometown. He went on to fight at an amateur level, enjoying an unbeaten run before turning professional.

Pennsylvania native Dempsey’s last win came over The Ultimate Fighter® winner Eddie Gordon.  After a brief move up to light heavyweight, he’ll now look to make a swift transition back down to 185lbs to meet Askham.

UFC FIGHT NIGHT® LONDON marks UFC’s return to England after almost two years’ absence. Tickets to the event sold out in just 27 minutes, with fans from all over the world expected to travel to the English capital to experience the event.