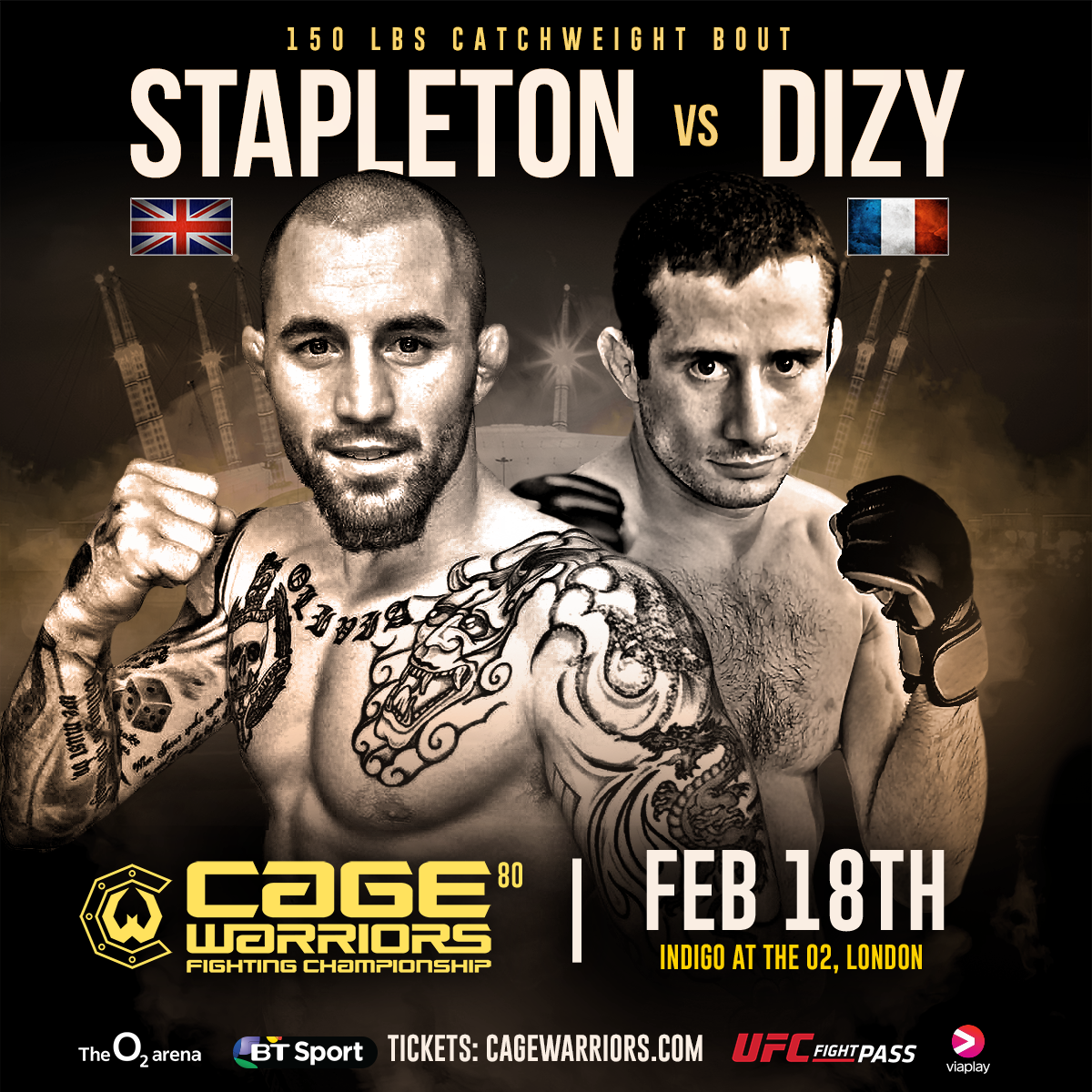 CAGE WARRIORS returns to the capital with a new home and a new signing ready to make an impact in a new, exciting year for MMA.

The promotion is delighted to announce Bellator vet Martin ‘.50 Cal’ Stapleton has signed a multi-fight deal with the promotion this week and will be thrown straight into the fray as the latest addition to a growing fight card that looks set to rock the capital on February 18.

His fight with Dizy represents his first step towards that aim, and you can bet Stapleton will be looking to make a big statement on his first appearance under the Cage Warriors banner for more than eight years as he looks to stretch his winning streak to six in a row.

Stapleton’s return is just one of four additions to the CW 80 fight card, with three more exciting matchups confirmed for London.

In-form Tom Green (11-1) finally arrives in Cage Warriors looking to show the world more of the talent that has seen him finish all 11 of his wins so far.

Green arrives in Cage Warriors riding a 10-fight win streak, keen to make a splash after his original CW debut was scrapped at the 11th hour when his scheduled opponent Brad Wheeler failed to make-weight for the contest.

Now rescheduled for London on February 18, ‘K-9’ will take on be looking to get his teeth into Tim Wilde (9-2), who had a standout win over UFC veteran Mickael Lebout at CW 78 last September.

Welterweights Mohsen Bahari and Fernando Gonzalez will do battle in a significant all-Scandinavian battle.

Norway’s Bahari (9-3) is no stranger to UK MMA fans, having competed on these shores on several occasions, while Sweden’s Gonzalez (7-1) will be making his UK debut in a bout that will not only move the winner up the welterweight ladder, but also see the victor claim regional bragging rights.

Also set for the card, Sam Creasey (7-1) returns to action looking to bounce back from his maiden pro defeat when he takes on Frenchman – and teammate of CW 80 main-eventer Karl Amoussou – Samir Faiddine (9-2) in a flyweight bout.

The event is set to be headlined by a battle for the vacant CW welterweight title as Manchester’s Matt Inman (19-8) takes on French-German powerhouse Karl Amoussou (23-7-2).

“After a super successful 2016 we are super excited to kick off 2017 with a bang in our new home at indigo at the O2, London,” said Cage Warriors president Graham Boylan.

“We have worked hard in putting this opening card of the year together and it’s stacked from top to bottom.”

Tickets for CW80 at the Indigo at The O2 are available from £20 at cagewarriors.com.

CW80 will be broadcast live to UK and Ireland fans on BT Sport, Viasat in Scandinavia and worldwide on UFC Fight Pass.