Both athletes have competed in mixed martial arts with ONE Championship and have been assigned to take part in the inaugural event on September 6 at the Phu Tho Indoor Stadium in Vietnam.

“I did not expect [ONE matchmakers] would give me an opportunity in ONE Super Series because I thought that I could only do mixed martial arts bouts,” Tomar reveals.

“But I am happy that I am competing in a stand-up contest. My background is wushu, and I have a lot of experience in stand-up bouts. I am always super ready for Muay Thai, kickboxing, and mixed martial arts bouts in ONE – it’s an honor for me!”

In spite of being new to the ONE Super Series ruleset, “The Cyclone” has spent time training in a couple of prestigious gyms.

“I have done training camps at Evolve and Phuket Top Team. I am following the steps for Muay Thai training that I learned from there,” she explains. 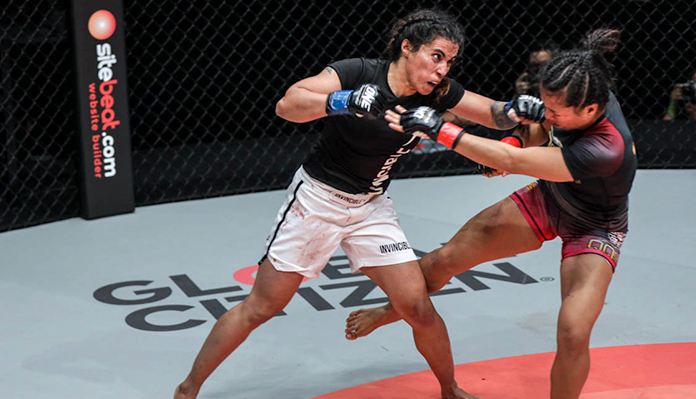 Despite her opponent being well-versed in Muay Thai, Tomar believes she still has the upper hand in their upcoming match.

“[Nguyen] is a very good striker that has potential, and she is fighting in her home country, so that will definitely help her,” Tomar adds.

“[But] she does not have a big heart, and she can’t take too many shots. I have been in the striking game for years, and I have a big heart which I already showed in my previous fights.”

Tomar is beaming with confidence ahead of her first ONE Super Series contest. Her hands raised in victory is the only way she envisions leaving the ring this Friday night.

“I am super confident. I really enjoyed my first win in ONE, and I want to stay on the winning track,” Tomar concluded.

“For the Vietnamese fans, it is a great match-up – striker versus striker. My prediction is that I am going to knock her out in the very first round.”