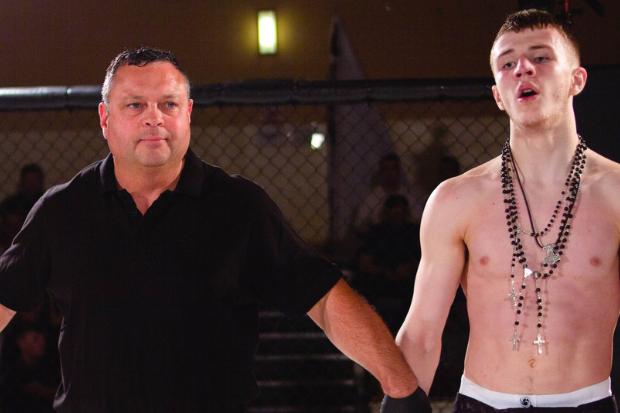 History will always have a place in the breathtaking sport of MMA. Whether it’s broken legs, show-stopping knockouts or even down to post-fight commentary antics.

But not many times in our lifetime will we hear of two active fighters, not only being family but father and son. There are a lot of children who want to follow in their parent’s footsteps when they’re grown, and it seems that MMA is no exception.

Today we take a look at a young, Highlander Warrior in Sean Clancy Jr. an explosive 18-year-old welterweight, bursting onto the MMA scene with Evolution Of Combat. Taking the warriors path just like his father, middleweight, Sean Clancy Sr 1-0-1.

I was lucky enough to grab some time with Sean to discuss his recent bouts, fight cancellations, and his upcoming bout at Evolution Of Combat 8 in Kilmarnock on August 7th.

I’d like to start by thanking you for taking the time out of your schedule, to talk to me today. How was training? Higher Level Martial Arts gym has produced such amazing talent, spanning over so many organisations. Training with these warriors must give you so much confidence going forward, is it a confidence booster knowing you’re in amazing hands?

“It was good. Got good rounds in as always. 100% training at the best gym in such a big radius is a confidence booster, for the kinda stuff we do, I couldn’t imagine trying to go anywhere else to try to get ready for a fight.”

I’ve heard great things about the gym from friends in the field. It must be an amazing place to be. Higher Level MMA is Scotland’s biggest, most successful and most well known MMA fight team.

​Based in Bathgate, West Lothian the gym plays home to two UFC fighters and several World, European and domestic MMA champions and contenders.

Growing up, did you always aspire to become a mixed martial artist like your father? Or did your interests arrive later?

“Nah, I always knew that’s what I wanted to do when I was wee. Obviously, there was other stuff that I wanted to do, as I changed my mind a lot when I was young. Like I used to want to be a vet, but it just went full circle. But it’s always been something I’ve done and not taken time away from.”

I’ve been lucky enough to have watched the footage of your previous 4 bouts, I must say, I have never seen somebody in the amateur division, as well as your age, be so composed in the cage. Taking nothing away from your opponents, but to me, you looked like a seasoned professional. How do you keep yourself in such a physical condition? And to be (in my personal opinion) be ahead of your game?

“Just hard work all year round to be honest mate. I know what I need to do to win and no ones going to do it for me, I’ve been around it for so long and it means so much to me. I don’t think it takes such a role in people’s lives as it does in mine.”

In your last bout with Ewan Muirhead, you finished him in such style. In my years of watching mixed martial arts, I don’t ever think I have seen a finish like it. Was this amazing buggy choke from side control planned? Or what is just a perfectly timed response to being engaged on the mat?

“I’d been catching people with it quite a lot in training so it was something I thought I would get. My coach actually told me to let the ref know if he’s gone out cause neither would’ve known what’s happened, which I did end up having to do cause he couldn’t really see his face.”

Here’s the link to Sean’s last bout for any that would like to bear witness to history. I myself have watched a few times in pure disbelief to such a unique end to a bout.

With such amazing takedown defence, as well as an array of skills at your disposal, do you see yourself in a professional bout in the near future?

“Going to let my coach decide when I’m to turn pro of course, but yes I would say so. In the fairly near future.”

It must be so frustrating, having fighters pull out?  Especially one after the other, can I get your views on this.

“Is what it is, it’s a part of the life. Don’t get forced to do it; it comes with the terms and conditions.”

Sean’s return to the cage has recently been put on hold, due to two cancellations from opponent’s. Frustrating to most in the game, but it hasn’t seemed to have dampened the spirits of the young highlander in any shape or form. A great mindset to have so early on in his career.

Many, if not all, organisations in the professional division, will be on high alert when you decide to go Pro. Which of these organisations, if any, could you see yourself representing one day?

“As many as I can get before going to the UFC. But if they want me in before that, then it’s not a problem with me haha.”

Sean’s opponent has yet to be announced for Evolution Combat 8, keep your eyes peeled though. It’s a fine addition to an ever-growing list of amazing talent added to the packed event in Kilmarnock on August 7th.

Last but definitely not least, is there anything you’d like to say to all your fans reading this today?

“Thank you to everyone who watches and supports me doing what I love. You’re all appreciated.”

I’m sure one day in the not so distant future, we shall be seeing Sean in a professional role. Where, and with who is yet to be seen. But wherever that organisation may be, do not be surprised if the organisation has a new champion in the young highlander.