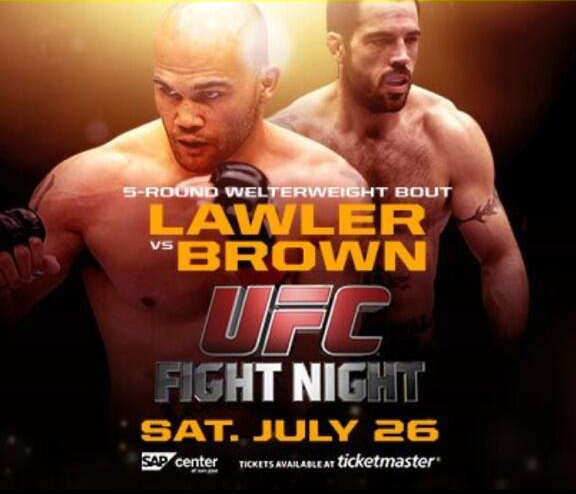 UFC Fight Night: Lawler Vs. Brown see’s two of the divisions most exciting fighters meet in the middle of the octagon with the chance to earn themselves a place next in line at a title shot against UFC Welterweight champion Johny Hendricks.

Robbie Lawler has already fought Hendricks in a fight to crown the new champion when former champion Georges St-Pierre announced his hiatus from MMA. It was a fight ‘Ruthless’ came so close to winning with most fans saying he was lost by a late takedown from Hendricks.

Matt ‘The Immortal’ Brown is at a career high right now. Riding a 7 fight win streak with 6 of those coming via knockout. However critics have said he’s yet to be tested against a top 10 opponent. He now takes on the number 1 ranked Welterweight in Lawler. Will he silence the critics and earn a shot at gold?

Anthony ‘Rumble’ Johnson looked fantastic in his return to the UFC against Phil Davis at UFC 172 but he now takes on one of the true legends of the sport in Antônio Rogério Nogueira who hasn’t fought since defeating Rashad Evans back in 2013 at UFC 156.

Michael Johnson was expected to face Josh Thomson at the event, however he had to pull out of the bout due to injury. Bobby Green stepped in on just two weeks notice.

UPDATE Matt Brown won’t weigh in again, and won’t be fined, according to this quote from MMAFighting.com there was miscommunication between Brown and the commision.

“I am going to chalk it up to a miscommunication,” California State Athletic Commission executive officer Andy Foster told MMAFighting.com. “He will not be fined because apparently he did not understand I gave him the two hours to run. Even though he told me he would take the fine, he will not be fined.”

Brown said that he was told by a CSAC doctor that he will not be allowed to cut any more weight, so he began to rehydrate immediately after the weigh-ins. UFC president Dana White backed up Brown’s claim and said Brown is still eligible to win a fight night bonus on Saturday and will still earn a number 1 contender status should be defeat Lawler.

** Juliana Lima weighed in again at 116.5lb so will reportedly be fined 20 percent of her purse.