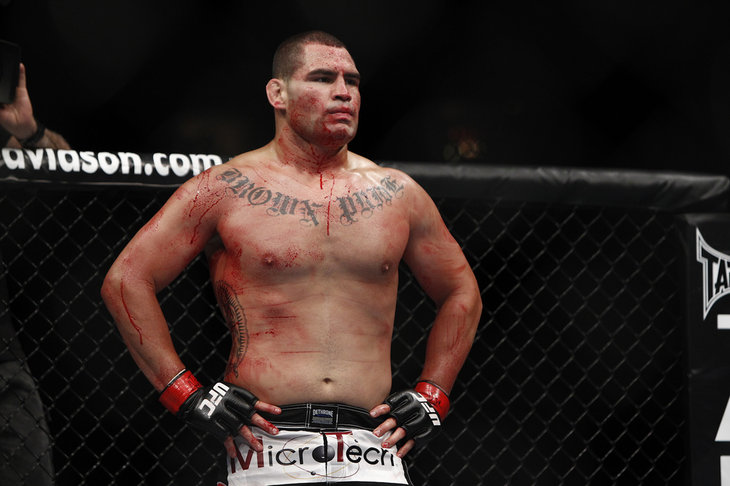 UFC Heavyweight champion Cain Velasquez has suffered yet another major setback in his return to action, enduring a right knee injury during training. That injury has been deemed severe enough to force him to pull out of his Nov. 15 title defense against Fabricio Werdum in the main event of UFC 180 in Mexico City.

Exactly how long Cain will be out of action for now is currently unknown though UFC president Dana White did state he believed Velasquez may be able to return by March.

“I’m so unbelievably disappointed that this happened,” Velasquez said in a statement released by the UFC. “To say I was looking forward to fighting in Mexico for the first time is an understatement. I wanted to fight on that card so bad. Looks like it wasn’t meant to be and it’s not going to happen. I’m going to get my [right] knee fixed and get back to training as soon as I can. I’m sorry to the fans in Mexico who were expecting this fight, and I hope to be able to come down and still be a part of this historic event.”

This setback will mean the UFC Heavyweight title will not have been defended in 2014.

Since winning the title for a second time back in December of 2012, the title has been defended just twice with Cain having last fought in October 2013 in a dominating TKO win against Junior Dos Santos at UFC 166.

The withdrawal is also damaging for the UFC business plan to venture in to Mexico considering that Velasquez, who is of Mexican American descent, was one of the key figures expected to lead the UFC’s push into that territory

However it’s not all back news. Fan-favourite Mark Hunt has agreed to step in and fight Werdum for the interim title as the show’s new main event. The ‘Super Samoan”, a former K1 champion, knocked out Roy “Big Country” Nelson in the second round in Japan on Sept. 20.

“I feel blessed to have this opportunity to fight for another world title,” Hunt said. “This is something that doesn’t happen often to people. First K1 and now UFC. How can I say no, even though it’s on short notice? I’m dropping everything and flying to Mexico tomorrow so I can best prepare myself for this fight. I have to get into shape and acclimatize to that environment, which is really important. There’s nothing to lose when you’re competing against the best at the top level.”

UFC 180 will remain on pay-per-view on Nov. 15 in Mexico City Arena

Dana White Open To The Return Of Brock Lesnar