January is going to be one of the best months ever for UFC fans. A slew of events are slated to go down in the first month of 2015; including UFC 182, UFC Fight Night 59, UFC on FOX 14, and capped off by UFC 183 on January 31st. Looking at these cards back to back is impressive, but not unusual. However, it’s the absolutely stacked fashion each of these brings to the month, giving us 30 days of awesome MMA.

Title fights, top contenders, rising fireballs, WMMA; everything will come on these four cards. Today we take a look at ten fights from these events to get a glimpse at just how hard Zuffa is kicking off 2015. Some of these we have been anticipating for months, others announced as recently as today. For the casual and hardcore fan, these are some of the bouts that have us most excited to ring in the new year.

#10 Jordan Mein Vs Thiago Alves – UFC 183 – January 31, 2015
Costa Phillippou Vs Urijah Hall almost took this slot, but there is just something that sticks out about this pairing of Jordan Mein (29-9) and Thiago Alves (20-9). “The Pitbull” recently returned from a long layoff with a decent unanimous decision win over Seth Baczynski. Jordan Mein is one of those fighters who beats everyone not at the top of the division. Both fighters are right at the cusp of being contenders in 2015, and this fight is absolutely a step in that direction. The winner will skyrocket back into the mix. However, I don’t think that is the big motivator in this fight. The real fire that will push this fight into being a stunner is that whoever loses will have a long 2015 as far as the title is concerned. There are just so many sharks in the 170 tank right now that any slip is a big one.

#9 Donald Cerrone Vs Myles Jury – UFC 182 – January 3, 2015
Donald Cerrone (25-6-1) is one fight away from arguably being the next guy in line for a title shot. Cerrone has had four fights and four wins in 2014, capping it off with a beautiful unanimous decision win over elite world class fighter Eddie Alvarez. Myles Jury (15-0) is unbeaten, most recently knocking off Takanori Gomi and Diego Sanchez in his undeniable climb through the ranks at lightweight. Cerrone would arguably be Jurys most difficult fight to date, and remaining undefeated against a guy like “Cowboy” would launch his career into the upper echelon of the UFC’s 155 division. For Donald, this win would all but guarantee him a shot at UFC gold in 2015. Matt Brown (19-12) and Tarec Saffiedine (15-4) are both in the same boat. Each man has lost to a title challenger or holder, and this has sort of made them part of a “floating” group of fighters who could become welterweight champion any given night. Brown and Saffiedine both know that they are still right there at the cusp of a title challenge, and each have already expressed that they will be coming into this one with the pedal to the floor. The winner will slide right behind Rory MacDonald in the line of threats to the welterweight crown, and that is exactly the kind of motivation that makes epic fights.

#7 Dan Henderson vs Gegard Mousasi – UFC on FOX 14 – January 24, 2015
Dan Henderson (30-12) has a clock over his head. This fight is either going to add a little more time to that clock, or possibly stop it. Mousasi (35-5) may not be the most threatening fighter in the division, but his youth and tenacity make this a very interesting bout for Hendo. A win over Henderson, from any era, is quite the feather in the cap, and Mousasi will be looking to put on the fight of a lifetime when all eyes turn on this match. The combination of both guys fighting styles assure that this will be one wildest fights to go down this January.

#6 Benson Henderson Vs Eddie Alvarez – UFC Fight Night 59 – January 18, 2015
I mean, who would not be stoked for this match. Benson (21-4) is the kingpin of free UFC cards, and this time he returns to TV against newcomer Eddie Alvarez (25-4). Of course, Alvarez in by no means a stranger to MMA, and considered one of the best in the game. With a less than stellar showing in his UFC debut, Alvarez is sure to come into this match all cylinders firing and ready to reclaim his aura. Nobody hates losing like Bendo, and if anyone is ready to hand Alvarez a second shut down, it’s certainly the former champion. He may not say it as much as we would like, but that title is very much still on his mind. Will Siver be another victim on McGregor’s growing list of elite fighters in his division? This fight takes us another step forward (or backward) on the McGregor (16-2) train, which has steam rolled its way deep into the MMA scene. McGregor is an absolute favourite, and for good reason. His performances are electrifying like his persona, and many feel he is the next #1 contender. Siver (22-9) has the chance to shut all this down and steal quite the bottle of thunder, and one of those well known spin kicks could change everything.

#4 Miesha Tate Vs Sara McMann – UFC 183 – January 31, 2015
If you think that the UFC does not listen to its’ fans and social media sources, let this fight be an example to you. Fans pretty much carried this fight onto UFC 183, and with the help of some good old fashioned Tweeting, Meisha Tate (15-5) and Sara McMann (8-1) sealed the deal on one of the most interesting and obvious matches in the UFC’s 135 division. Fight fans will now be treated to an epic battle, with the winner perhaps getting another crack at pound-for-pound champ Ronda Rousey. That is of course if Ronda gets past Cat Zingano at UFC 184 a few weeks later. Needless to say, with the grappling of Tate and especially McMann, you can bet this one will be an excellent combination of trading strikes and impressive transitions.

#3 Alexander Gustafsson Vs Anthony Johnson – UFC on FOX 14 – January 24, 2015
I don’t even know what to say about this very recently announced showdown. Johnson (18-4), who has returned from a lifted suspension, was ripping the Light-Heavyweight division to shreds before the sideline. Gustafsson (16-2) has been campaigning for his rematch with Jon Jones, a fight that was scheduled but plagued by misfortune and injury. Gustafsson now finds himself yet again one more fight away from the rematch for the title many felt he won in the first fight against Jones. “Rumble” Johnson mixed into the contender equation makes this fight one that will no doubt put fans of each into overdrive. 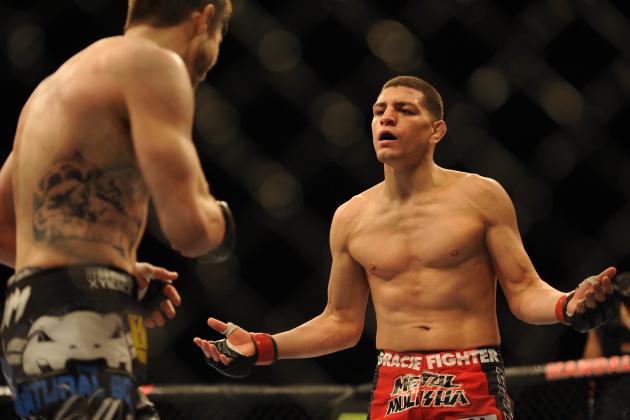 Two incredibly popular fighters who have been sidelined for a while return to face off against one another. This fight has actually been in the mix off and on for a while, especially with Diaz (26-9-1) keeping it fresh in the media’s “short term memory.” I can’t imagine the army of Silva (33-6) fans who are eager and anxious to see “The Spider” return to the cage after losing the title and subsequent rematch in tragic fashion. Each brings a unique and elite level of striking, and both are very proven on the ground, despite hardly ever fighting there. Strikes galore amidst the return of two of MMA’s most popular and intriguing fighters make the last day of January perhaps the best of the month.

#1 Jon Jones Vs Daniel Cormier – UFC 182 – January 3, 2015
This probably tops the list as far as fights fans have been waiting for. With multiple crossings over the years and several setbacks to fight, Jon Jones (20-1) and Daniel Cormier (15-0) carry with them one of the most exciting battles we have had in quite some time at 205. The long awaited match finally goes down, interestingly enough, in the same month top contenders Alexander Gustafsson and Anthony Johnson also battle it out. Expect 2015 to jump off hard when the cage door shuts for UFC 183′s main event. These are two guys literally almost never lose a fight, adding an extra surge to this title fight, as if it needed any.

MOST EFFECTIVE STRIKERS IN EACH DIVISION: LETTING THE STATS DECIDE