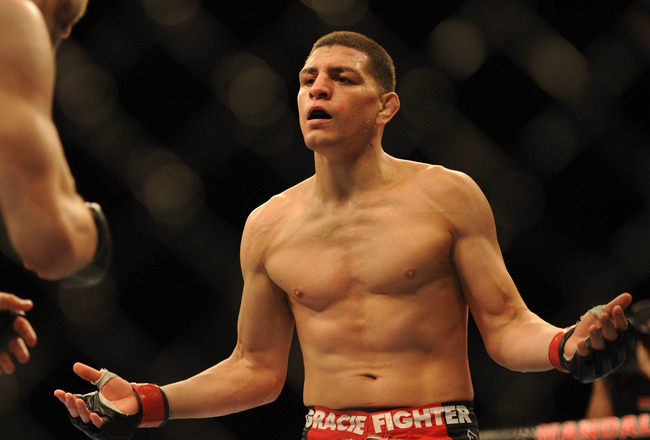 In preparation for the biggest fight of his life with Anderson Silva, Nick diaz has been sparring with some of the best strikers in the world.

He has been training with GLORY middleweight champion Artem ‘The Lion’ Levin, kickboxer/MMA fighter Chidi Njokuani, and LA’s Joe ‘Stitch Em Up’ Schilling.

Schilling spoke recently about the training

“I’ve been up in Stockton finishing up Nick’s camp. I’ve never done as much running in my life man,” said Schilling. “The other night after sparring we went running at like three o’clock in the morning, five mile run. I think this week I’ve run 17 miles already. His idea of ‘a little run’ is a six-mile one at a pace that is just insane. He is nuts.

“He’s in great shape though, real athlete. He did nine rounds of five minutes the other night with a fresh opponent each round, kickboxing with takedowns. He’s doing stuff like that almost every day. It should be a good fight, he couldn’t have had better training for it.”

“I think it would be embarrassing for (Silva) in there with me. The more I have studied Anderson Silva for this fight camp of Nick’s the more I think he is good at kickboxing for MMA but in a professional kickboxing fight he would get wasted.”

“Artem came in and he’s just a different level. Nick’s not beating his ass but like I said to Nick, you don’t have to beat Artem Levin in a kickboxing match, you only need to beat the guy you are facing on fight night. So even though he was getting frustrated at times, he has learned a hell of a lot in this camp and I think that will show on fight night. He hurt Chidi checking one of his kicks the other day. He’s blocking kicks, he’s countering, he’s looking really good.”

UFC 184 Weidman Injured And OUT Of Belfort Fight, Rousey Vs. Zingano Promoted To Main Event