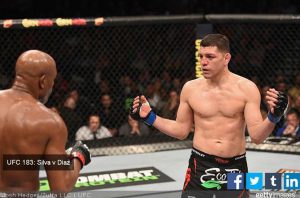 Earlier today news broke by Yahoo sports that Nick Diaz had failed his post fight drug test for the third time following his decision loss at UFC 183 to Anderson Silva. The NSAC later confirmed that Diaz had indeed failed for marijuana metabolites over the allowable limit of 150 nanograms. It’s not really a shocker to the fans that Diaz tested positive, the big shock was that Anderson Silva had also failed his test. Silva tested positive for the steroid drostanolone and for a second steroid, androstane during a random out-of-competition test administered by the Nevada State Athletic Commission on Jan. 9th.The UFC has now released statements on both of fighters.

“On February 3, 2015, the UFC organization was notified by the Nevada State Athletic Commission that Anderson Silva tested positive for Drostanolone metabolites on his Jan. 9 out of competition drug test. UFC’s understanding is that further testing will be conducted by the Commission to confirm these preliminary results.
“Anderson Silva has been an amazing champion and a true ambassador of the sport of mixed martial arts and the UFC, in Brazil as well as around the world. UFC is disappointed to learn of these initial results.

“The UFC has a strict, consistent policy against the use of any illegal and/or performance enhancing drugs, stimulants or masking agents by its athletes.”

“The UFC has been notified by the Nevada State Athletic Commission that Nick Diaz has tested positive for marijuana metabolites following his fight with Anderson Silva at UFC 183 on Jan. 31 in Las Vegas, Nev. The UFC has a strict, consistent policy against the use of any illegal and/or performance enhancing drugs, stimulants or masking agents by our athletes. As a result of his positive test, Diaz has been informed that he has violated the UFC Fighter Conduct Policy and Promotional Agreement with Zuffa, LLC. The UFC organization will fully respect the Commission’s decision relating to Diaz at a hearing set for February 17.