James Mulheron – One step at a time

by Peter Knox
in MMA News
27 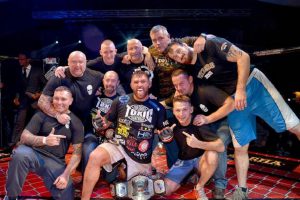 The UK #2 heavyweight James Mulheron faces off against Germanys Ruben Wolf this weekend at Made 4 the cage. Mulheron is a currently undefeated at 7-0 in his career and looks to stay that way as he faces the next obstacle in his career on 28th February at Rainton Meadows arena. His last performance was certainly impressive as he won by TKO as he threw a spinning backfist to end his fight with Dayman Lake early in the 3rd round to retain his M4TC heavyweight crown.

It’s no secret that Mulheron trains with the number 1 heavyweight in the country in former UFC veteran Phil de Fries almost every day. It’s no wonder that he’s been so dominant in his professional career so far, and has had no problem in staying undefeated. His opponent this weekend however promises to give Mulheron the big test he needs.Ruben Wolf is 9-6 inside the cage and is on an impressive 3 fight win streak stopping all 3 opponents inside 2 rounds.

Will this win get the attention of the UFC? I asked James if he wins big this weekend against Ruben Wolf then what did he think about a possible debut in the UFC on the card in Scotland. He said “I am just concentrating on the fight coming up against Ruben this weekend, but it would be nice if I did get on there”

Humble as always we wish the best of luck to James Mulheron this weekend on Made 4 the cage!