King Of The Castle You can catch Ed and John Redmond on this week’s episode(week of August 24th 2015) of the Throwdown Podcast featuring Bryan Lacey.

To be the best in Mixed Martial Arts, you need to beat the best. In today’s episode of A 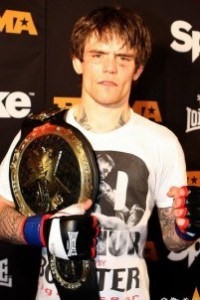 cross The Pond, we will meet a fighter who has proven to be the best 135 pound fighter in Europe.

Fighting out of Hermel Martial Arts, Ed Arthur is 6-0 with two Knockouts,1 decision, and three Submissions so far in his career. Arthur made his Professional debut in July 2013, defeating Jamie Pritchard via Knockout in round one. In his Bamma debut, he faced Ben Rees at BAMMA  14 and defeated him via Doctor Stoppage at the end of round one. Arthur  next faced Knockout artist Nathaniel Wood  at BAMMA 15. winning via Rear Naked Choke in the third round.  he would go on to Submit Mike Cutting at BAMMA Fight Night 1 via Rear Naked Choke in round two before earning a Unanimous Decision over Martin Akhtar In his next fight, Arthur became the first ever BAMMA 135 champion with a come from behind second round Rear Naked Choke Submission in the co main event at BAMMA 20 over Alan Philpott. Arthur will now defend his title against Shay Walsh in the co main event of BAMMA 23.
1. Arthur V Rees Bamma 14-