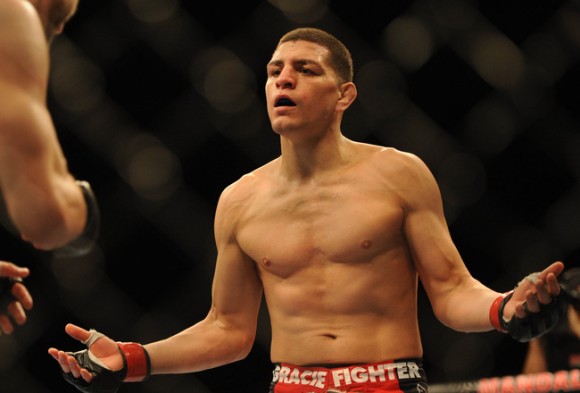 Yet more controversy took place at WSOF 22 last night as fighting took place between the Diaz brothers camp and Khabibs camp. MMAFighting.com’s Shaun Al-Shatti, who was on the scene, reported that a fight between Nurmagomedov and Nate Diaz started it all.

In a video posted to Youtube by MMA Interviews, Nick Diaz is seen throwing a beer at Nurmagomedov at the World Series of Fighting event Saturday night at the Planet Hollywood in Las Vegas. WSOF matchmaker Ali Abdel-Aziz can be seen frantically rushing back and forth, trying to calm things down.

However things didn’t end there as more footage has emerged of the brawl talking place outside the Hard Rock venue on the streets. Check it out below:This is not the first time that the Diaz brothers have been involved in an ugly brawl. Who can forgot the now infamous Strikeforce: Nashville brawl back in 2010. Yet again it was at a Jake Shields headlined event but this time Nick Diaz sucker-punched Jason “Mayhem” Miller who had crashed Shields‘ post-fight interview. This sparked a huge melee between the various camps. It was incredibly ugly. The melee wound up being the last network TV event for the now-defunct promotion.

It was only a matter of time before things kicked off between Khabib and Nate who have both been  trash talking on Twitter for some time now. However Nurmagomedov is currently recovering from a second knee surgery in the last year.

The Diaz brothers were at WSOF 22 in support of their teammate Jake Shields. Nurmagomedov was there to show his support for his brother who fought on the card.