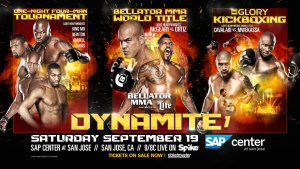 The featherweight title fight joins a landmark event in combat sports that will see both a Bellator cage and a Glorykickboxing ring on one arena floor at the same time — something that has never been done before. It all goes down September 19 from the SAP Center in San Jose, Calif., featuring Tito Ortiz (18-11) challenging Bellator Light HeavyweightWorld Champion Liam McGeary (10-0) in the main event.

Additionally, the previously announced fight card features a bout between Zack Mwekassa (13-2, 12 KO) and Saulo Cavalari (31-2, 19 KO) for the vacant Glory Light Heavyweight Championship as well as Bellator MMA’s four-man, one-night light heavyweight tournament to determine a No. 1 contender in the division that includes the promotional debut of Phil Davis (13-3), as well as Emanuel Newton (25-8-1),Linton Vassell (15-4-1) and the return of Muhammed “King Mo” Lawal (15-4, 1 NC).

“Bellator MMA: Dynamite 1” airs live and free on Spike at 9/8c. Tickets for the historic event start at just $30 and are on sale now at the SAP Center box office and are also available for purchase at Ticketmaster.com, as well as Bellator.com.

Varga most recently defeated top-ranked featherweight Mosab “The Jaguar” Amrani in a “Fight of the Year” contender at Glory 20 on April 3 to capture the vacant title. While Adamchuk earned his upcoming title shot following an impressive debut at Glory 22 on June 5, coming in on 24 hours notice to beat lightweight contender Marat Grigorian in one of the biggest upsets of 2015 thus far.

Turning Up The Heat